The Picts, those most elusive of early medieval Scottish peoples, seem to have disposed of their dead in a variety of ways. Remains that can still be found in the landscape include cremations, simple burials in the ground, long cist burials, burials under cairns, and burials under round and square barrows. It is also probably true that disposal was achieved by exposure and excarnation – practices continuing from pre-history. What remains unclear is how any of these contemporaneous burial practices were chosen for a specific individual or group.

An Artist’s Impression of Pictish Barrows by Alan Braby

There are a number of known Pictish burial sites in Scotland. It was formerly thought that these were confined to the east and north-east of Scotland but aerial photography and some recent excavations show evidence of typical square “Pictish” barrows in Lothian, the Borders, and Dumfries & Galloway. There are more than were previously thought.

In Pictish cemeteries, cairns predominate over barrows in the north of Scotland. Cairns often contain a number of individual burials, sometimes 5 to 6, whereas barrows almost always contain only one burial. An individual cemetery may contain both cairns and barrows, and excavation and subsequent dating show these are contemporary, usually 3rd to 6th centuries AD. After this date, burials in unenclosed Pictish cemeteries become less common, new burials being related to church sites. Garbeg proves something of an exception with radio carbon results giving 10th to 11th century dates.

The burials are invariably aligned roughly east-west, even in the centuries pre dating the introduction of Christianity. Where bones remain – and this is not common – the head is to the west. Remarkably, almost all Pictish burials are unadorned with grave goods, in great distinction to the contemporary richly-endowed Anglo-Saxon burials further south in the Borders and England.

Where it is possible to analyse the individuals buried in barrows and cairns they tend to be adults between the ages of 25 and 45 – “child-bearing women and warriors in arms”. Contemporary burials are known from, eg, monastic sites and these contain older individuals, so older Picts did exist. They were just not buried in barrows. Also, curiously, women tend to outnumber men in these barrow and cairn burials.

Excavation of a Pictish cemetery and royal site at Forteviot, just outside Perth, shows a number of simple burials alongside cairn and barrow burials (see http://www.gla.ac.uk/media/media_183902_en.pdf). These simple burials did include children over the age of three. It is just not known what happened to the infants who died, nor the old folks. Perhaps these had excarnation or exposure?

Pictish Round Barrow at Forteviot

There is usually no spatial association of Pictish burials with surviving Pictish symbol stones. These latter highly-decorated and artistic carvings, whose function and meaning are still unknown, generally occur outwith areas in which cemeteries occur. Again Garbeg proves an exception to the rule with a symbol stone, now on display in the Inverness museum, having been recovered from one of the barrows there.

Pictish burials sometimes come to light by chance. AOC were brought in when preliminary test-pitting of an unremarkable field in Perthshire in 2012 showed possible barrows. An extensive excavation uncovered five burials in a row – see the photo below. Note that there are two conjoined square barrows, two separate round barrows, and a rectangular barrow, all with the burial in the middle aligned east-west. (See https://canmore.org.uk/site/346583/bankhead-of-kinloch).

The extended excavations at Rhynie in 2013 uncovered a long cist burial, unusually with a good collection of bones – elements of the legs, pelvis and jaw bone. In so many other excavated burials the bones have disappeared in the acidic soils. Radio-carbon dates from these bones have revealed a solidly Pictish date of AD 420-566 (see the REAParch Blog article).

So, Garbeg and Whitebridge?  There will be more specific information about each of these sites during the field visits and in future blog posts. However, a plan below of Garbeg cemetery gives some idea of the barrows there: 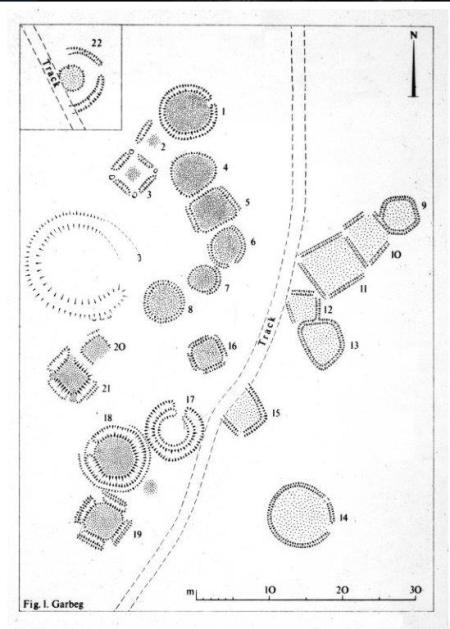 Prepared With much help from a lecture given by Dr Adrian Maldonado given at Groam House Museum, Rosemarkie on 24th June 2014. See here for info about Dr Maldonado.

For further information on the NOSAS visits to Garbeg and Whitebridge go to the NOSAS What’s On Page.  At the time of publication NOSAS has just completed clearing gorse off the several of the barrows at Garbeg and extensive aerial photography of the area by quadcopter – more news to follow! 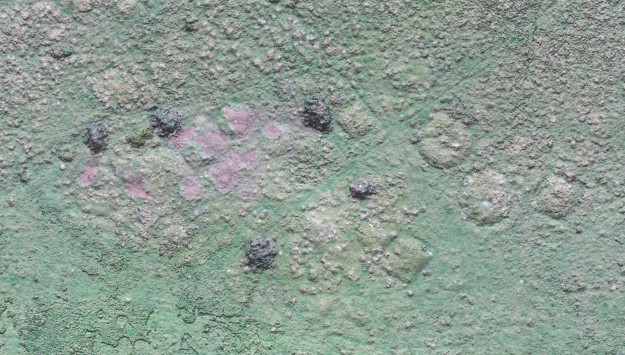