Jim was a founder member of NOSAS, which celebrated its 20th anniversary in 2018. He was known in the Highlands for providing important aerial photos of numerous archaeological sites over many years. Sadly, Jim died on June 16th, after a long and wearisome illness. His extensive collection of aerial photographs has been gifted to NOSAS and will form the JS Bone Collection, in his memory. This is the story he wrote of himself, in the months before he died. (Introduction revised Sep 2018). 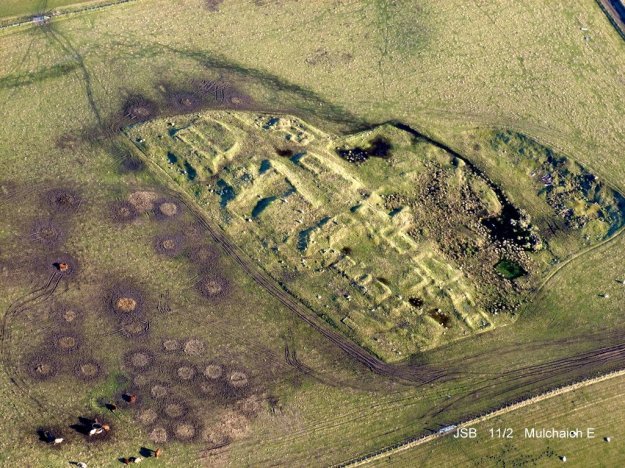 Aerial photograph of Mulchaich, Ross-shire. The settlement , distillery and chambered cairn at Mulchaich were the subject of NOSAS projects between 2009 and 2013. See the blog post.

It appears to me that people can be divided into two categories – those who love flying, and those who do not.  Brought up in close proximity to Prestwick Airport, I recall watching aircraft there, and determined that I would one day find out more about aviation.  Inspired by a selection of Biggles books, I joined the local ATC (Air Training Corps) squadron, enabling me to sample flight for the first time in 1950 in an elderly Anson.  Military aircraft have a distinctive odour of aluminium and oil, complemented in this case by an off-putting whiff of vomit, but I enjoyed this first ‘air experience’ flight along the Ayrshire coast.  For the next flight, I borrowed a folding camera, and tried a few shots through the rather scratched Perspex window.  Surprisingly, the results came out quite clearly, and another interest was born. 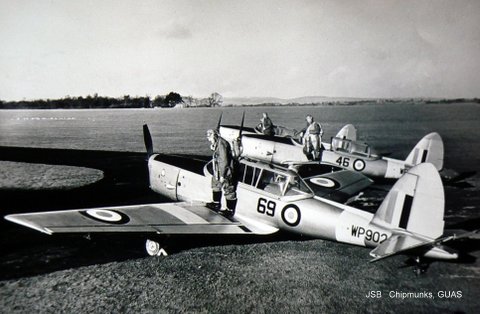 Going to University in Glasgow, I lost no time in finding the HQ of the University Air Squadron (GUAS), and was fortunate enough to be accepted as a Cadet Pilot in the RAFVR.  This offered a high standard of flying training, during 1953-7, provided by experienced RAF instructors at Scone Airfield outside Perth.  Our Chipmunk aircraft was state of the art at that time, but cameras were not encouraged on training sorties.  At the end of my four years, I asked if I could take a camera with me on a dual flight with my instructor, having noticed some archaeological sites which I wanted to photograph.  By opening the hood, I was able to take quite a good shot of a hill fort to the south of Perth, which presaged further attempts in later years.  The Squadron experience qualified me for a Preliminary Flying Badge – a sort of junior wings – and allowed me to apply for a Private Pilot’s Licence, costing a very reasonable ten shillings, when I left the unit.

A lean period followed, after I moved to Reading and got married. But then I met a fellow GUAS member who was spending a vacation working at the nearby Handley Page factory.  Sir Frederick Handley Page encouraged his staff to fly, and my friend was able to hire a Tiger Moth at White Waltham for ten shillings per hour.  Split between the two of us, it was cheaper than hiring a rowing boat on the Thames.  This venerable biplane was a dual controlled type with an open cockpit, and offered some opportunities to try photography with a 35mm camera.  Unfortunately, this generously subsidised activity ended with the return of my friend to Glasgow, and I gave up flying for a year or more.  My moment of epiphany came on the road to Woodley Airfield, at that time a struggling  grass field outside Reading, when on a Sunday walk, I saw a small aircraft approaching to land, and the longing to fly was reignited.  A club member took me up for a short flight, and I was hooked enough to reactivate my licence and keep it going. 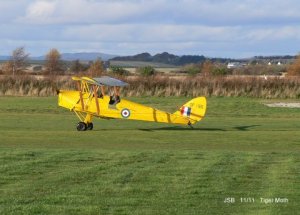 Not long after, I found myself in Aberdeen, in temporary accommodation in Dyce.  On the first evening there, a Tiger Moth burbled over on its way to land at the airport, and I lost no time in following it, to find a small group there with the owner of the machine, a local businessman.  I got checked out on type again, discovering it was used for glider towing.  The following year, it was replaced by an ex-military Auster – a three seat version with an enclosed cockpit.  This had a high wing and opening windows, but wing struts could be a nuisance when using a camera.  Flying the tug turned out to be a useful way of building hours in the early 1960s.

Another move, this time to Hereford, enabled me to join the Shobdon Aero Club, at an old wartime airfield on the Welsh Border. The club had Cessna 150 aircraft, popular two-seat trainers from the USA, with a high wing and only one strut on each wing.  These, and the larger four-seat C172, provide excellent platforms for aerial photography.  One summer’s day, 16th August 1972, a gentleman appeared wanting to do some flying to photograph Roman sites in the area, and he needed a pilot.  It was thus I met Barri Jones, Professor of Archaeology at Manchester University, and we flew a number of sorties in the area in the early 70s.  His enthusiasm for things Roman was infectious, and I learned a lot as he photographed the foundations of Roman settlements and numerous crop marks.  The county archaeologist, S.C. Stanford, also took several flights over  Herefordshire. 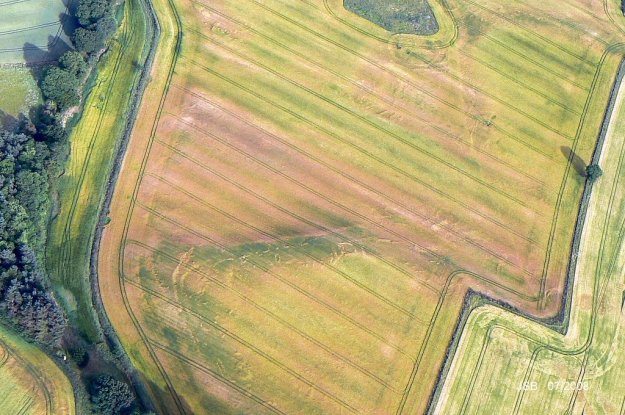 Aerial photograph by Jim of Tarradale barrow cemetery and ditched enclosure partly excavated by Barri Jones 1991 – 1993. See our Blog Post and a report of the Excavation and Survey by Jones. The barrow cemetery will be excavated in 2019 by the Tarradale Through Time project.

Returning to Aberdeen some years later, I found several of my former acquaintances were still flying, although the burgeoning oil industry traffic was causing congestion at Dyce.  An ex-RAF airfield was found at Fordoun, near Stonehaven, and a Cessna 150 was hangared there.  This field was close to Stracathro Roman site, allowing me to visit on numerous occasions the temporary camp, with its distinctive gates, as well as the construction camp, and the eventual Roman fort.  Using 35mm colour slide film, these traces showed up remarkably well in the very dry year of 1976.  At around this time, I also flew with Ian Ralston and Ian Shepherd on reconnaissance trips in the Grampian area.

Moving to Inverness in 1983, I joined the Highland Aero Club at Dalcross, which was again equipped with Cessna 150s.  One day, a gentleman appeared enquiring about hiring an aircraft for aerial photography, and it took only a moment for me to recognise Barri Jones again.  This led to a number of exploratory flights, initiated by Ian Keillar’s Moray Aerial Archaeology Group (see The Moray Aerial Survey by Jones, Keillar and Maude), among which were the identification of the Portmahomack site, coverage of the Burghead pictish fort, and some cropmark images of a possible Roman camp near Cawdor .   At this time, local flyers with sufficient experience were able to act as pilots for professional archaeologists, and Bob Gourlay, Jill Harden, and John Wood took advantage of funds provided by the Royal Commission on the Ancient and Historical Monuments of Scotland to carry out reconnaissance flights.  In hindsight, the late 1980s and early 1990s provided a much increased photographic coverage of the Highlands, and resulted in the discovery of many new sites.  The Royal Commission (RCAHMS) took many images at the time, flying from Edinburgh and using first class equipment, but the availability of local pilots in the Highlands overcame the time and cost of bringing  their Cessna 172 north.  Also, those on the ground, knowing the local area, could respond quickly when ideal conditions appeared for aerial photography.  Experienced pilots were invited to submit applications for photographic projects which would attract support from RCAHMS. 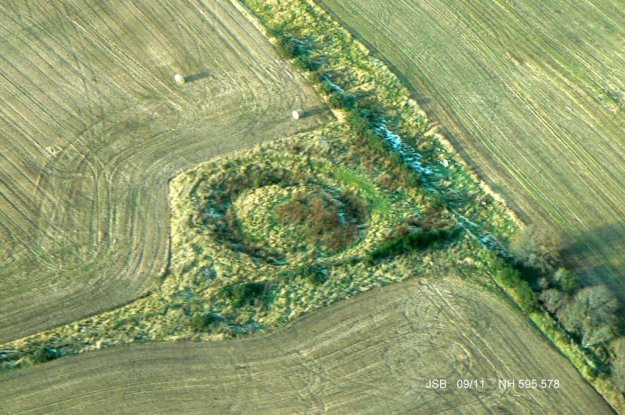 Providentially, in 1998, Aberdeen University introduced their distance-learning certificate course in field archaeology, based in Inverness.  This course was an ideal opportunity to consolidate my sketchy knowledge of the subject, and I was able to enrol with the first group of students.  Over the three years, we visited many sites in the Highlands, and were tutored by John Wood and Dorothy Low from Highland Council. The information gained helped me enormously in identifying and understanding sites throughout the region. Thus I became a founding member of NOSAS (see NOSAS at 20).

Tightening budgets and more restrictive regulations in the new millennium have meant a cut-back in sponsored flying. On the positive side, digital cameras greatly reduce the cost of taking shots, so that any interesting feature can be recorded during private flights.  The interest in possible Roman traces remains strong, but I have yet to make a positive identification over the course of numerous flights in this area.  I must admit that during some sixty years of private flying, the quest for ‘something different’ in the passing landscape has greatly added to my enjoyment of the activity, and it was with regret that I decided to give up flying in December 2013. My last “interesting” flight, with an instructor co-pilot, was over Urchany on 10th April 2015, by some strange serendipity the very day that NOSAS was undertaking a survey of the site. 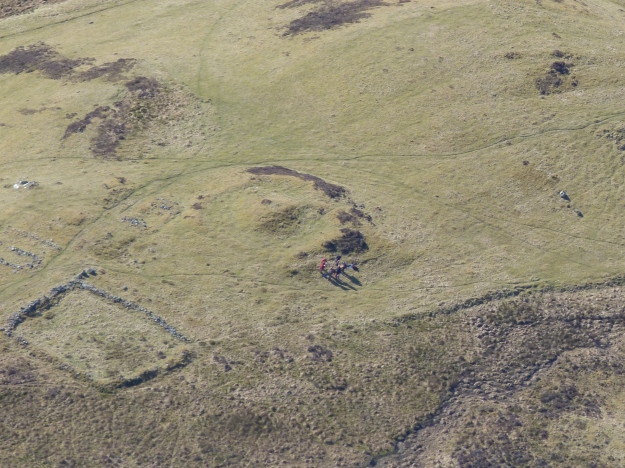 Aerial photograph of Urchany by Jim. A blog post on the Urchany survey is forthcoming.

It is clear that the development of drones, improvements in camera technology, and the growing sophistication of computer applications, represent a quantum leap for aerial archaeology, and I look forward to viewing some of the results from my armchair! 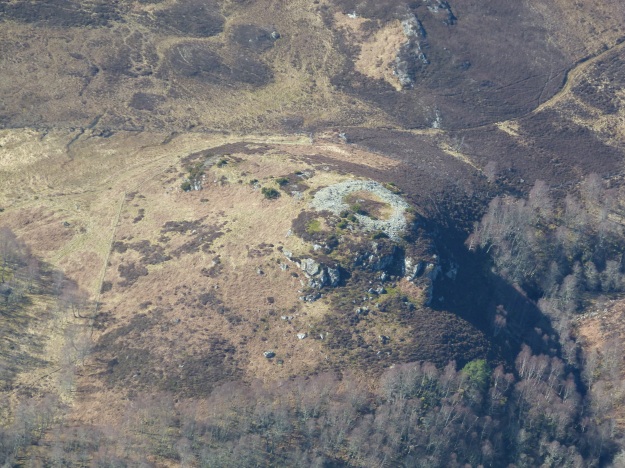 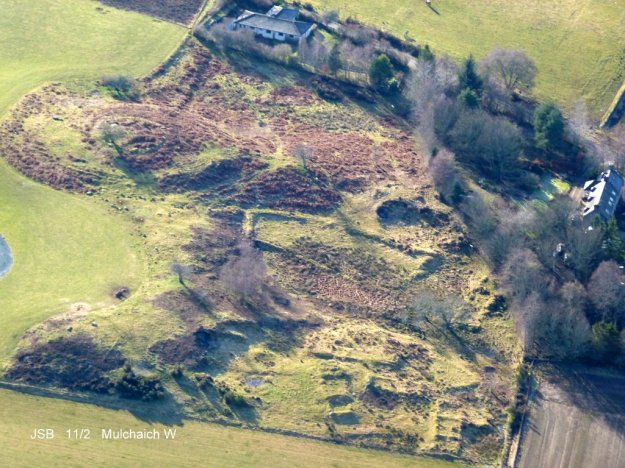 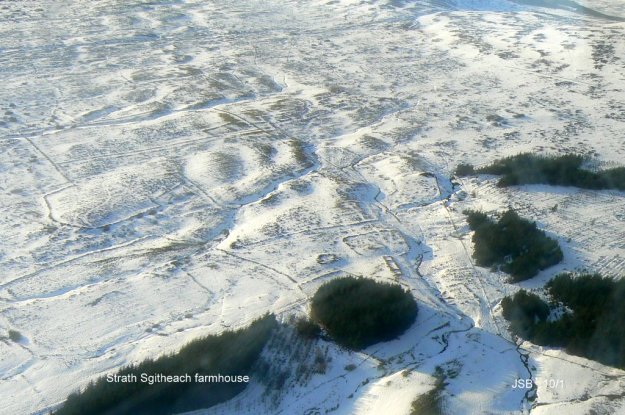