In April 2015, NOSAS was approached by the development officer of Aigas Community Forest to see if we could undertake an survey of this newly acquired 285-hectare forest. The local community had completed the purchase of the forest from the Forestry Commission that month. Part of the sale conditions were that an archaeological survey would be required. After some discussion, mainly centred on the size of the task ahead, NOSAS said yes, and the two co-leaders of the survey – Roland Spencer-Jones (RSJ) and Anne Coombs (AC) – got into planning mode.

RSJ undertook a desk-based assessment of the history and known archaeology of the forest. This included searching the maps on the digital map resource of National Library of Scotland, the Canmore archive of Historic Environment Scotland, the local Highland Council’s Historic Environment Record and maps from the previous Lovat Estate archive. In addition he had conversations with local landowners and local community members who had either had personal experience of the forest and its history or had undertaken some research of their own. Two of these local landowners were able to provide old photographs that complemented the historical record.

This desk-based assessment concluded that: 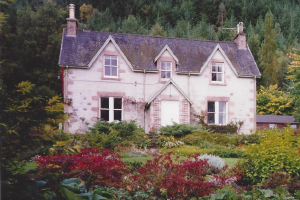 These three photographs demonstrate clearly the successive cropping of the Aigas Forest. The building is Aigas Mains farmhouse, on the southern border of the forest. The photographs are taken in 1933 (above left), 1960 (above right) and 1992 (right)