The Shandwick stone, or Clach a’Charaidh, (see HER MHG8539) is one of a group of Class II Pictish symbol stones on the Tarbat peninsula seaboard, These are carved rectangular slabs several metres high which typically feature a large cross on one side, plus elaborate decoration, enigmatic Pictish symbols and secular or biblical scenes. They are thought to date from the 8th or 9th Centuries AD. For a general guide to the Pictish stones in the Easter Ross area see the Highland Council’s Pictish Trail.

In November 2015 there was a NOSAS field trip to Tarbat to visit the stone at Shandwick, along with those at Hilton of Cadboll and Nigg. Here we were able to obtain access behind the steel framed glass case which now protects the Shandwick stone against the elements. Alan Thompson took some photos of the hunting panel of the stone and then used photogrammetry to bring out the details of the scene. 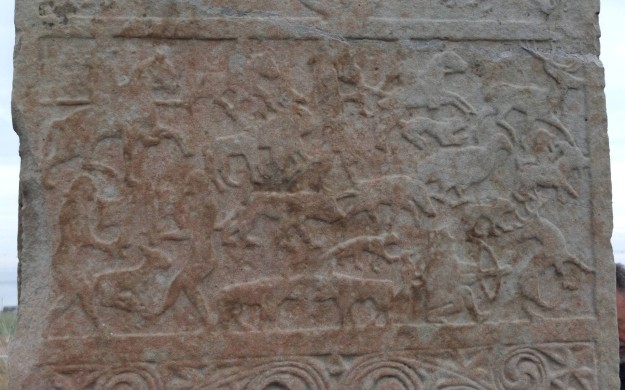 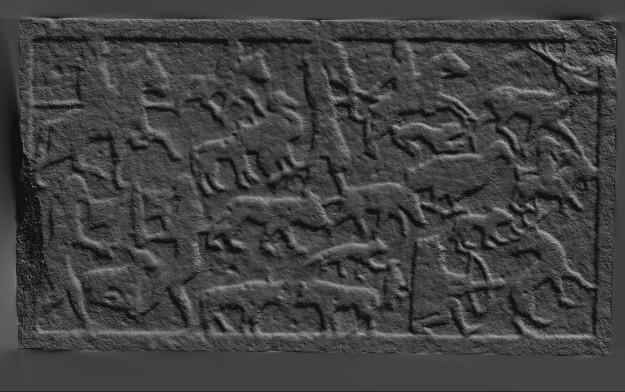 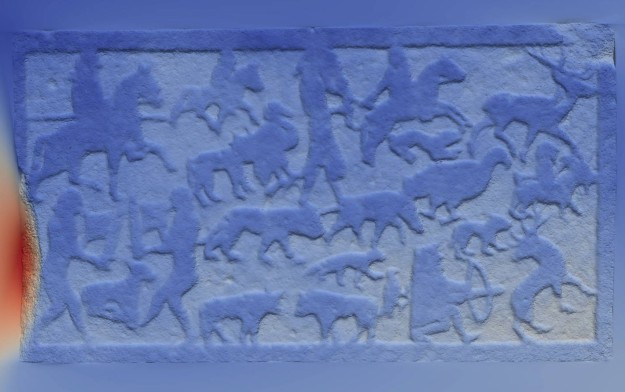 The top image above shows one of four camera pictures that Alan took of the panel from different angles. He then processed the four images to produce a 3D model of the surface which we can look at in different ways.

The middle image shows the 3D surface with colour/texture removed, but with angled lighting applied to bring out the relief using shadowing.

Finally in the lower image the 3D surface has been processed to show depth. Areas which are ‘closer’ to the viewer are dark blue, those further away lighter blue, etc to red for distant ones. The red coloured area on the left is due to a broken part of the stone.