Excavations to the north of Thief’s Row 2014

Our excavations in 2014 produced more informative data to assist with our research into the history of the Burgh of Cromarty including a more detailed picture of the layout and phasing of the buildings along each side of Thief’s Row, where our main excavation site is located (see a history of Thief’s Row) This includes the footings of three buildings shown on the 1880 Ordnance Survey map sheet on the north side of Thief’s Row, under which we identified the remains of another earlier structure, dating to the 18th century. At our limit of excavations on the north side of the road we uncovered three medieval structures with associated cobbled vennels and boundary walls – these have produced ceramics of 14th to 15th century date. One of these structures had been re-used during the 16th to early 18th centuries and the thickness of the clay-bonded walls would suggest it was at least a two-storey high building – most likely a merchant’s house.

To the south side of Thief’s Row, our excavations uncovered extensive structures and deposits of medieval date (13th to 15th centuries) including stone buildings and more ephemeral wattle and daub structures, along with their associated boundary gullies, vennels and evidence for small-scale smithing, which will be investigated further in 2015. These areas of settlement and activity were abandoned relatively early in the settlement history of the burgh, the structures being landscaped over with spreads of ash, fish bone, animal bone and shellfish middens that were most likely generated from activities taking place on the north side of Thief’s Row and along the High Street to the west. In the latter stage of the 18th century, the south side of the road was then given over to small garden plots and eventually more open fields. 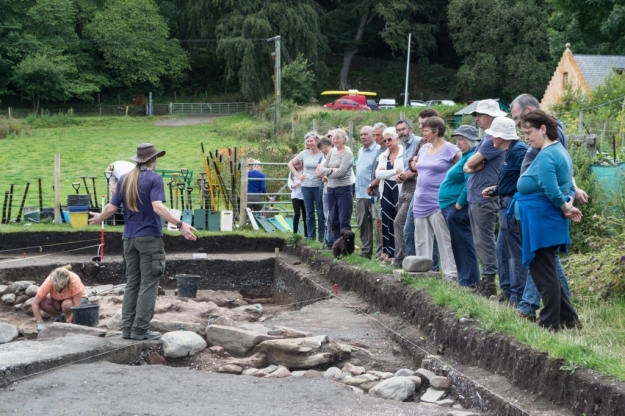 END_OF_DOCUMENT_TOKEN_TO_BE_REPLACED

The 2013 dig had been great fun, so we offered our help for 2014. Bob was set to work, using a mattock, a draw hoe and a barrow, though not necessarily in that order. For me, the choice was a little harder: my back is troublesome, but I had been told to keep active, so I was asked to tidy up one of the uncovered 2013 trenches so that it could be photographed. Eventually Paul, the finds ‘cataloguer’, told me he didn’t want my offering of several fish bones, which was all I could find for the first few days. Michael joined me to uncover more of the trench, more tidying. Then things looked up: med pot appeared and half of a glazed, ceramic spindle whorl – I was on a roll. In the wall was what appeared to be part of a quern, then another (which wasn’t). I moved onto another trench to do some trowelling where I uncovered a whole quern stone.

Meanwhile my original trench was in danger from Bob and Dave: their dug area had impinged on one longitudinal wall. Hours later there was no trench, just a vast uncovered area, out of which a total of 5 pieces of quern stone were removed, 3 of which fitted together. Why anyone would break such an object is a mystery, but several such broken, and at least one unbroken, were found incorporated into the walls of the buildings. Likewise, Bob, among others, found a broken iron pot with a large stone on top of it, under what appeared to be the entrance to one of the medieval houses. Why would anyone break an iron pot? I can see that you could bury broken pottery, to avoid having to explain how it came to be in such a state, but iron? 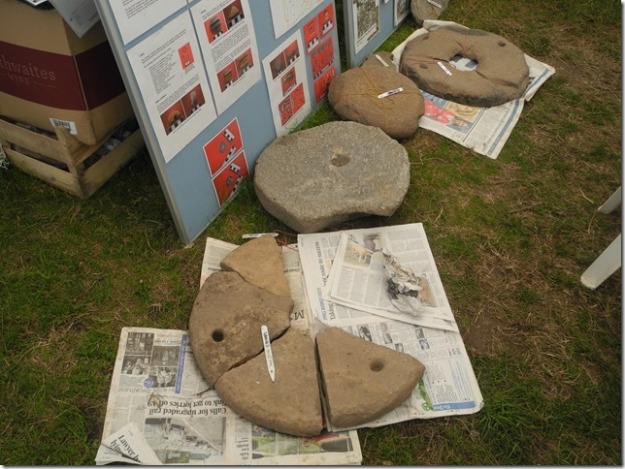