Cnoc Tigh is about 14 to 15 meters in diameter with walls that have been considerably thickened over the years. It appears to have a narrow entrance about one metre wide in the south west. An unusual feature was a ledge along the visible inner face of the wall just above ground level, rather like a scarcement ledge in a broch. This could have been to support a timber floor just above the ground which may explain why there is very little evidence of a floor and associated debris at ground level. I understand that there were no ancient finds at Cnoc Tigh.

Tarlogie is a larger and even more disrupted structure than Cnoc Tigh. It has an unusual splayed entrance to the east, probably not the original entrance. Several finds came out over the two sessions including quern stones, a soapstone cup/lamp fragment, slag, an orca tooth and part of an alloy broach provisionally dated to about 200 AD. Towards the centre of the floor area is a pivot stone and there were several hearths.

Oskar Sveinbjarnarson used his quadcopter to take aerial photos of both sites. We will all have to wait until later in the year to hear from Candy on any further progress and results from the finds and samples.

Oskar states about Tarlogie that “Radiocarbon dates from the site indicate that the dun was built during the Iron Age (c. 400-200 BC) and possibly abandoned. It has a re-occupation phase which dates to about 200-400 AD (Pictish).“ 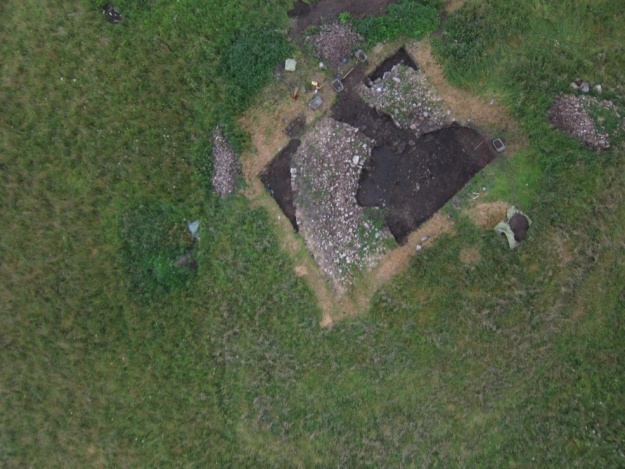