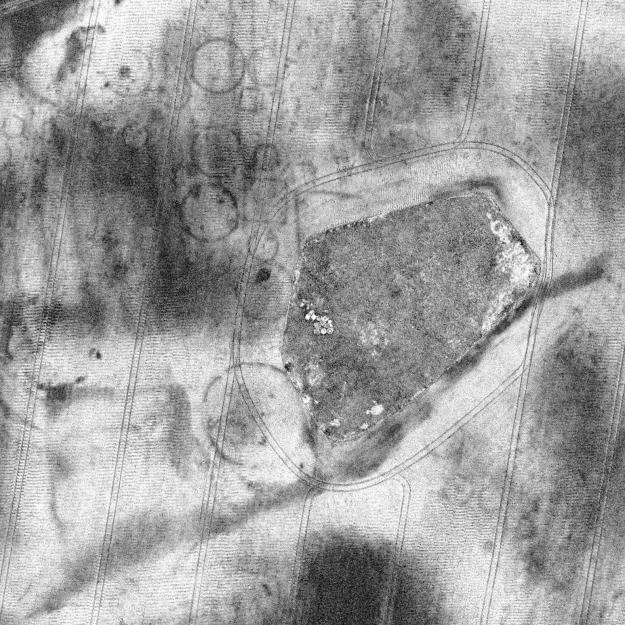 In the first three weeks of September 2019 volunteers from the North of Scotland Archaeological Society supported by members of the local community excavated a suspected Pictish cemetery in a field near Tarradale House. Aerial photographs had previously shown the possible existence of a number of barrow graves in the area but there was little to see on the surface as the mounds had been almost totally ploughed away but their surrounding ditches appeared as ghostly outlines on the aerial photographs. A small, but growing, number of barrow cemeteries has been identified in Scotland but only a few excavated. Aerial photographs show the remains of at least 28 square and round barrows at Tarradale making it currently the second largest burial ground of this type in Scotland. The site could originally have been more extensive as parts of it have either been ploughed out or are too deeply buried to show in aerial photographs. Recent high-resolution photographs taken by drone have suggested the existence of more barrows towards the perimeter of the field and possibly into an adjacent field. Our excavations showed that Tarradale was a barrow cemetery of monumental proportions and potentially one of the most important in Scotland.

Although we are still waiting for radiocarbon dates from the Tarradale excavation, the presence of round and square barrows and their spacing and distribution leaves little doubt that we are dealing with a Pictish cemetery potentially from the 5th or 6th century AD, an important period in the formation of early kingdoms in northern Britain. Tarradale lies in the eastern side of Ross-shire on the Beauly Firth and only six miles from Craig Phadrig, an important stronghold and regional capital in the Kingdom of Fortriu. Part of this centralisation of power was reflected in the creation of monumental cemeteries and Tarradale may have been the burial place of the local elite. No Pictish symbol stones have been found at Tarradale, although symbol stones, including cross slabs with symbols on them have been found in adjacent parishes, the nearest being the recently discovered Conan stone three miles from Tarradale. However, in the same field as the barrow cemetery, a fortified settlement was excavated in the 1990’s; no primary dating evidence for the Picts was obtained but on stylistic grounds pottery from the fortified site has been dated to between AD 300-800 so this may well be the settlement focus of some of the people buried nearby. 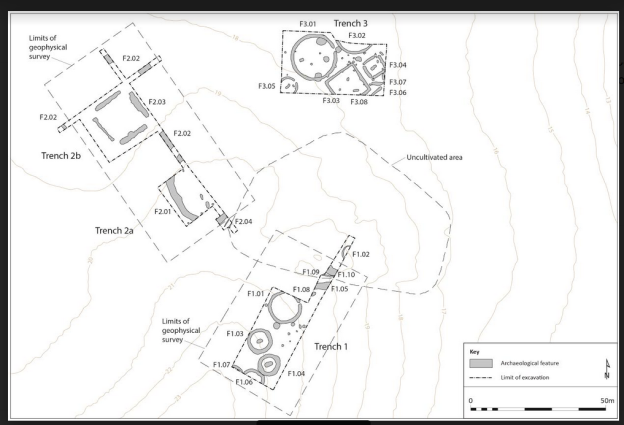 The TARRADALE THROUGH TIME excavation in September 2019 was a major research excavation to find out to what extent the features on the aerial photographs survive underground. We opened three large trenches (totalling almost half an acre) carefully chosen to explore the different patterns and sizes of the barrows. It soon became clear that the cemetery had been built on a vast scale. Trench 1, on the highest part of the site, revealed four large ditched barrows cut into the very stony soil. While aerial photographs had suggested some loss of barrow features in this area owing to plough damage and natural soil erosion downhill, we found the ditches and the bottom of the grave cuts to be relatively well preserved and, but no human remains or grave furniture survived.

In trenches 2a and 2b we investigated a very different soil type (a sandy substrate) with a very different pattern of barrows. Here we found a large segmented ring ditch some 30m in diameter, 1m-1.5m deep, and steep-sided, and while there was no sign of a grave within it, the presence of two fragments of beaker pottery (one from the ditch, plus an earlier topsoil find) hints at a Bronze Age date for this barrow. If this is correct, we believe that this earlier feature was still a prominent landmark in the landscape around 2000 years later when a large Pictish square barrow (17m across with causewayed corners and on stylistic grounds presumed to be Pictish) was laid out nearby (revealed in trench 2b).

The large square barrow in trench 2b had been more than quadrupled in size when it was surrounded by a second square enclosure of truly impressive proportions measuring 40m across, with ditches up to 7m wide and 2m deep. Whether this was constructed contemporaneously with the inner square or as a later enlargement and aggrandisement is not known, but the resulting double-ditched square barrow enclosure is the largest of its kind known in Scotland. No burial was found but it was abundantly clear that this prominent feature, still shown on an estate map of 1788, had been levelled in the late eighteenth or early nineteenth century. If it was a burial mound (though a shrine or some kind of funerary meeting place are other interesting possibilities) it hints at an occupant of the highest, possibly royal, social status.

Trench 3 was a massive undertaking, opening an area 40m long and up to 25m wide, and as the hundreds of tonnes of soil were scraped back, an amazing array of ditches and pits emerged. A round barrow 7m in diameter (containing a clear central grave cut) lay a short distance from a larger (17m-wide) round barrow, with another large example beyond. Close by, two neatly laid-out square barrows, c.8m wide with causewayed corners, were accompanied by a larger diamond-shaped, barrow 13m across. Sections across the barrow ditches revealed them to be only 1-2m wide and fairly shallow, and both within and without the barrows there were numerous pits and areas of burnt soil, as well as several unenclosed graves scattered between the monuments. 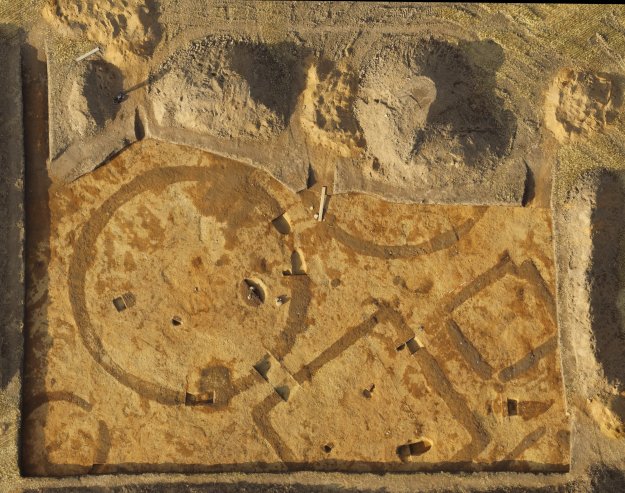 Trench 3 showing barrows of dramatically different sizes and shapes (drone photograph by Andy Hickie). The grave where the skeleton was found is at the bottom of the picture in the bottom left of the diamond shaped barrow.

Despite the presence of these graves, the acidic local soil meant that any human remains that they might have contained have not survived. We decided to investigate two graves more closely, the first being an unenclosed cut lying between two square barrows. Here too, no human bone was found, but the outline of a log coffin was preserved as a dark stain in the soil, confirming that a burial had once been present. The second grave lay within but towards the side of the diamond-shaped barrow. It was initially difficult to discern during excavation if the bottom of this grave had been reached as the graves are difficult to define as a result of being cut into fairly homogeneous light-coloured sands and gravels and backfilled with the same material. However, we could see some intriguing blackened patches emerging, and – in true archaeological tradition – on the final day of the 2019 excavation, inspired trowel work by Steve Birch, the director of the excavation, revealed the shadowy outline of a human skeleton.
No complete bony structures had survived – the shape was purely a chemical deposit from the complete deterioration of the skeleton – but it was remarkably detailed, with each vertebra of the spine and the shape of the upper arms and shoulders, legs, and feet visible. Interestingly, the lower limbs seem to have been bound together before burial, and the whole individual was surrounded by the faint outline of a log coffin. The skull had survived slightly better, though it had collapsed in on itself. The skull was lifted for further investigation and it is hoped that if any teeth survive in the sand filling the cranium, we may be able to carry out isotope analysis to learn more about this individual’s life. 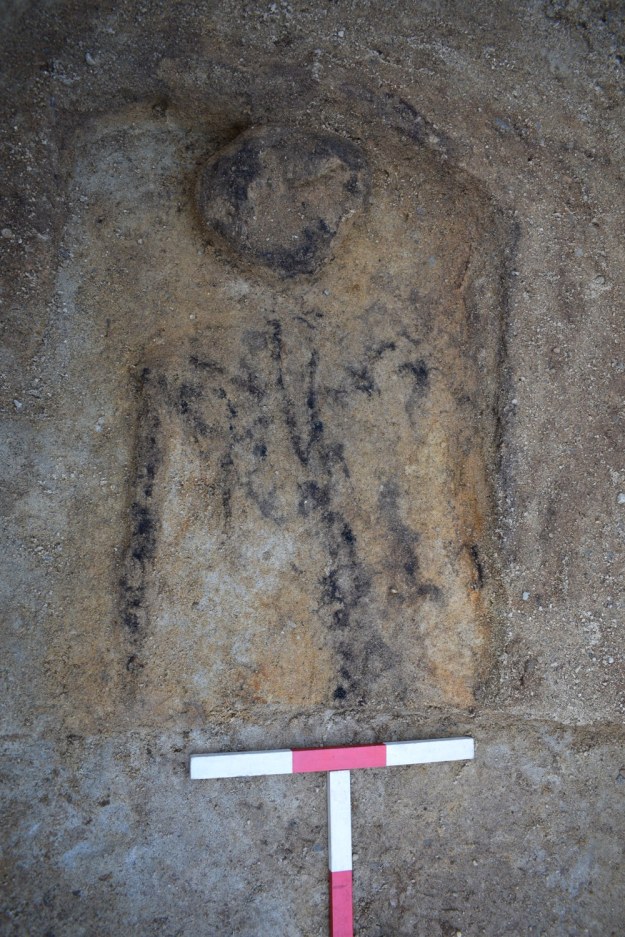 Shadowy outline of skeleton within a log coffin in Trench 3

The emergence of monumental cemeteries like Tarradale is seen as an important transition in the visibility of the dead in the archaeological record. The creation of larger barrows may be linked with the emergence of elites and kingship, and the aggrandisement of existing grave mounds with the increasing status of the deceased’s descendants. Yet this kind of monumentality begins to disappear in the region from the 7th century onwards, possibly owing to the evolution of overkingship based in southern Pictland and the growing influence of Christianity favouring simpler burials close to churches. The TARRADALE THROUGH TIME project has dramatically shown that, elusive though the Picts may be there is still considerable evidence beneath the plough soil of powerful elites. 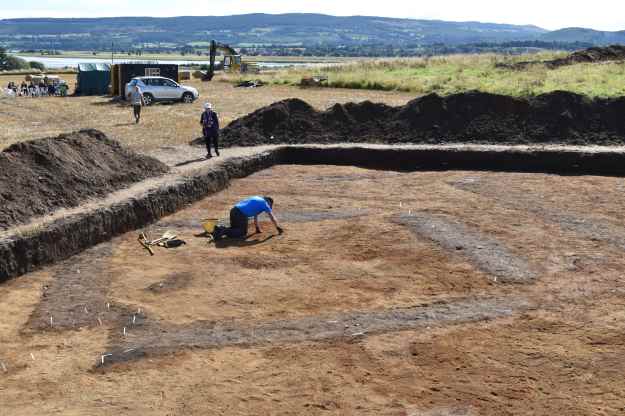 Gordon Noble and Nicholas Evans (Eds) The King in the North: the Pictish Realms of Fortriu and Ce, Birlinn, Edinburgh 2019. 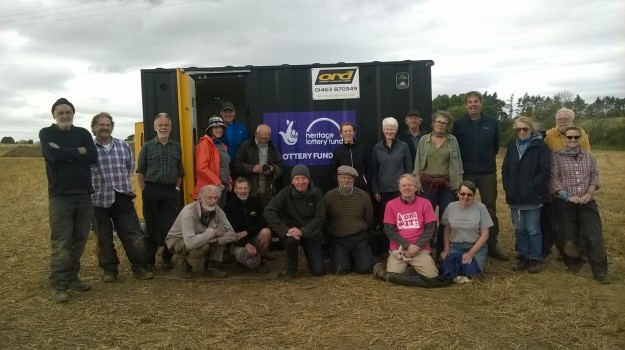 Some of the TTT 2019 excavation team 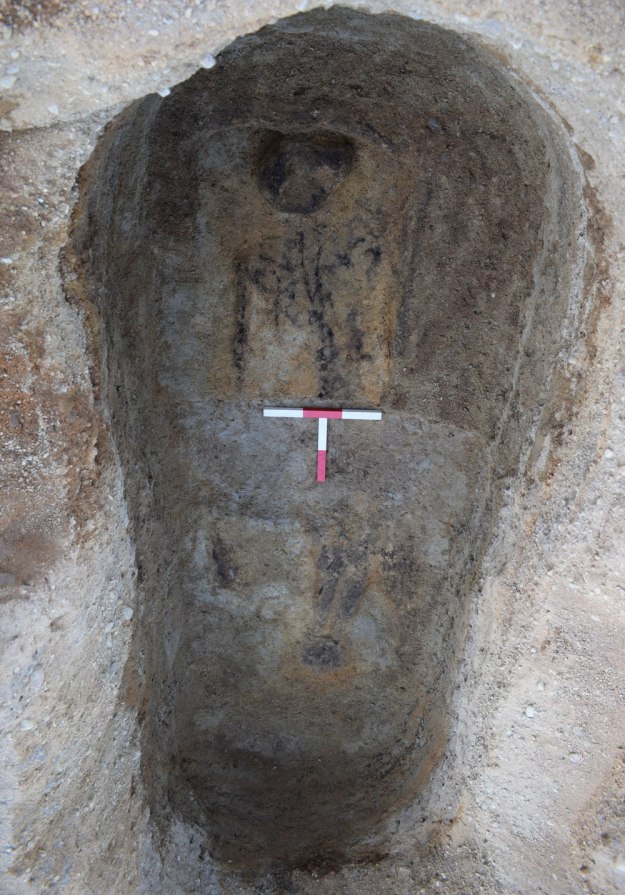 Shadowy outline of skeleton within a log coffin in Trench 3