Eric is a local metal detectorist whose exploits include discovering the Belladrum hoard of Roman coins, among other finds. He has put his email address at the end in case you want to contact him directly. This article is the report of a recent survey in the fields at the back of Beauly, in the angle between Station Road and Croyard Road. It appears to have identified a military firing range, in use throughout the 19th Century, which was previously unknown.

A and B on the map below identify the fields where the finds were made and the red arrow shows an approximate direction of fire on the range throughout its use as explained in the following report:

The image above right shows the musket balls found, the main group top left are all for the Brown Bess calibre of musket, about l l bore or 0. 75 inch. This was in use up to the middle of the 1800s and gives us  the early date for the military use of the land. There is no evidence of the earliest date, but it is reasonable to suppose that it began as training for the defence of the realm in the time of the Napoleonic wars, which could place the start just back into the 1700s.  The group of balls bottom right are smaller and may be pistol shot, or more likely from officers’ privately owned muskets. The two folded pieces of lead are almost certainly home made flint holders to clamp the flint into the musket securely. The majority  of these items were found on field “A”  and as they are relatively short range, being quite inaccurate due to the smooth bore and loose fit of shot in that bore, it points to this being the firing point of all the weapons.

This next group of shot is composed of Minie bullets, invented by a French Army Officer Claud-Etienne Minie in 1857,  these allowed the muzzle loading muskets to be rifled and still  be easy to load. The hollow base caused the bullet to  expand into the rifling  and give it a gyroscopic spin for more accuracy and longer range. The rifling can be seen on some of the bullets and many of them are so badly damaged that there must have been something like a stone wall used as a backdrop. These almost all came from field  “B”  which because of their extra range points to this being the far end of the range.

This third group shows on the left a group of Martini Henry bullets, calibre 0.45 inch.   This weapon was introduced in about 1870 and was the first breach loading rifle used by the military. It was still single shot but allowed a firing rate of about 13 rounds per minute, as against only about 3 rpm previously.  The group to the right of the image contains various small lead bullets and musket or pistol balls, some so flattened  that  they must have hit an iron target. The Martini Henry was the weapon that saved the British at Rorkes Drift. The long bullet far right is a .303 mk 1/2  from about 1900 which fits in with the raising  of the Lovat Scouts.

This group of heavy horse harness buckles and fittings are unusual in that  there are so many of them, one would expect to just find one or two at the most on this area of farmland and their presence points again to heavy military use.   This theory is also supported by some of the items being heavily tinned, giving  a look of silver. All military movements of munitions and supplies was by horse and wagon up to the first world war.

The group of objects above confirms the general dating of the military use of the fields. Top left is a lead pencil which would have been straight  and probably used to write a soldier’s name in clothing.  These marks actually lasted longer than ink and are common finds on military sites. Next to it is a watch winder and a small leather decoration.  Bottom left are three livery buttons which elude identification but would fit in with units being raised by wealthy landowners. Bottom right is a small group of items from near the base of the knoll,  these I believe to be parts of cock fighting spurs, which again fits in with a military encampment. 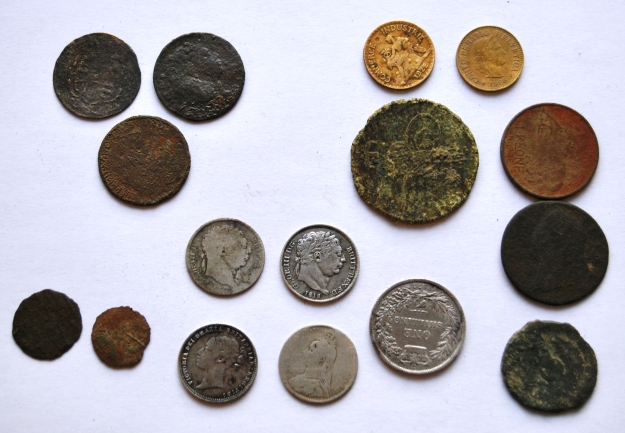 A group of coins, not valuable, but interesting and adding to the dating of the site.  Firstly the two coins on the bottom left are what is known as Turners, two pence coins, from the times of Charles l and II, and bottom right is a Bawbee or 6d of Charles ll;  these take us back into the 1600s.   The second coin from the bottom on the right is a George II halfpenny.  The silver coins are two George III sixpences, one dated 1818,  and the remaining silver are three Victoria coins from the late 1800s.  The largest coin is actually a token penny, too corroded to identify, but from the 1790s. The three coins round the top right corner are modern French, Swiss and Norwegian.

Most interesting are the top left three coins,  these are all counterfeit George lll. The top left example is a guinea and should be gold, the other two are shillings and should be silver. All three coins are made of copper alloy and would have been plated to disguise them.  Again the fact that there are several is very unusual, I have found shillings before but only ever one on a farm, so again this would fit in with large numbers of personnel as in a military camp.

The results of this survey were surprising as it is totally unexpected that there should be a firing range so close to the village, the evidence shows that it was in use throughout the 1800s and possibly before. During this time, however, we must take into consideration that the village was much smaller than today and there would have been a considerable amount of open space between the military and the general public. Also there was virtually no such thing as health and safety then.

There is evidence that these two fields formed at least part of a firing range and were subject to heavy military use throughout the 1800s. The shot recovered, both musket balls and bullets, are predominately recognised military calibres and at this time there were no civilian shooting clubs. There is a problem deciding which military units may have operated on these fields as no badges or identifiable buttons turned up.  If we go back beyond our available evidence we have the 78th Fraser Highlanders, raised in 1757 by Lt. Col. Simon Fraser, as the 2nd Highland Battalion, and disbanded in Quebec in Dec. 1763. It is just possible that they could be responsible for some of the musket balls when they were first formed, but it is a very tight time line as they only existed for about six years and some of this abroad. This size of ball existed in the military back into the 1600s. However it is far more likely that the range came into existance in the time  of the Napoleonic threat of invasion. There were a large number of units raised because of this from 1790 onwards.  These were the Volunteer and Fencible units and were effectively the Home Guard of the day.

Over time many of these units combined with one another or were disbanded,  thus we have as possibilities the 78th Highland Regiment of Foot (Seaforths) 1778, amalgamated with the 72nd (Highland) Rgt. of foot in 1809 and with the 72nd of foot (Duke of Albany’s Own Highlanders) in 1823. There was another unit, the 7lst  Reg. of foot raised in  1775  for the American revolutionary War and known as Frasers Highlanders, which gives a local connection. In 1881 the 72nd (Duke of Albany’s Own Highlanders) Regiment of Foot and 78th (Highlanders) (Ross-shire Buffs) Regiment of Foot amalgamated under the banner of the Seaforth Highlanders.  It seems fairly safe to assume that the site was used by units which eventually operated under the banner of the Seaforths.

It is strange that no obvious military buttons turned up on the site given the large numbers of men that would have been involved and the spread of time, over a hundred years.  There were quite a collection of plain buttons of various sizes showing traces of gilding or silvering on the backs which could well have been military and used by infantry men. Perhaps after further ploughing when more items brought to the surface, some buttons with military insignia will turn up and give a more positive identification of the units involved.

As a result of information from a Beauly resident I have discovered the range is shown on the OS 1st edition map. This has proved to be extremely interesting, it seems I was right in identifying a range but wrong in its position.  It appears that the badly damaged bullets must have been the result of ricochets from the hill, whilst I cannot think of a reason for the musket balls being so far over into field “A” unless there was an earlier range in a different position.  The map clearly shows the marker’s butt, the target and firing positions from 100 yards out to 300 yards.  It is interesting that the 300 yard firing point is on the side of the road right by the Lovat Estate Office. Note also that the Volunteers had their own drill hall up where the present school is.

4 thoughts on “A Metal Detecting Survey of Beauly Fields”