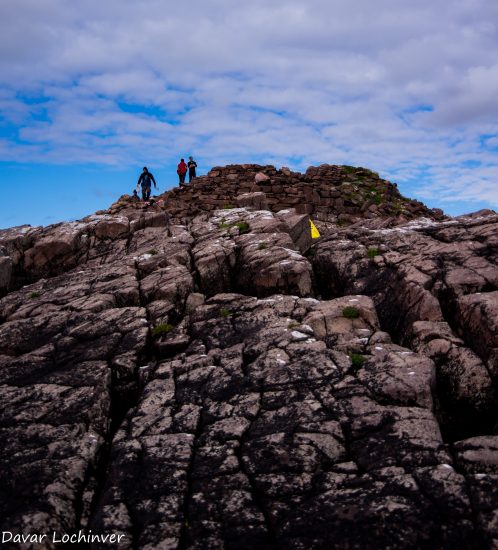 Exterior view of the broch

The excavation at Clachtoll broch has been running for just over a month and with each passing day, the excitement seems to be growing. Clachtoll ticks so many boxes in this aging student’s checklist, it’s hard not to ramble on about it.

Carbon dating tells us that two thousand years ago, someone piled stones forty odd foot high – current estimates from the amount of rubble put the broch at 12-14 metres.  I’m far from a pro and not a great judge of distance, so like to describe that as a little higher than a three-storey house. What were they thinking? Was Clachtoll a key location on the West coast in the iron age? Why put what is surely the largest broch on the West coast there?

Image of 3D Model, created from photos taken 29th July (James McComas). Full model at the foot of the post.

The excavation is a community run project. After some frankly amazing fundraising, Historic Assynt have raised enough to get in a team of professionals for not just the dig, but a series of workshops, site tours, a little bit of experimental archaeology – next week, a corbelled cell will be built and potentially some local otters may get a new home as an outcome and most importantly it will result in a legacy attraction (complete with new path created from the spoil heap) for future visitors.

Then there’s the manner of the collapse. Most broch’s fell out of use gradually. For one reason or another, their occupants abandoned them, died out or may even have been removed. Many have suffered a gradual collapse over the years – in some cases tens of centuries after their initial construction.

The belief is, that Clachtoll is different. Like many others it collapsed, but in Clachtoll it might have been catastrophic, contemporary, and conclusive enough to prevent re-entry or re-use. END_OF_DOCUMENT_TOKEN_TO_BE_REPLACED

The road on the higher ground looking west.

This field visit on 25th June 2017 was by way of a “reccy”; the intention was to prospect the route with a view to including it in the proposed publication “Old Routes in the Highlands”, part of the NOSAS 20 year celebrations. What we know as the “Fish road” was constructed between 1792 and 1797 to provide a land link for the newly established settlement of Ullapool to the “outside” world; it was funded by the British Fisheries Society . The road is known as the “Fish road” but whether or not fish were transported along it is debatable , however in 1794 the Old Statistical Account of Loch Boom Parish reports; “there is an excellent road betwixt Ullapool and the town of Dingwall and it is now nearly finished, where lately nothing could be carried but in creels on horseback, carts and carriages can now travel with the greatest of ease.”

A route between Contin and Ullapool has almost certainly been in existence since prehistoric times. In the 17th and 18th century the route was one of the drove routes from the west to the markets in the east and south. ARB Haldane, in “The Drove Roads of Scotland” has:

Pennant in 1772 noted that in the Loch Broom district the sale of black cattle to drovers from as far south as Craven in Yorkshire was the chief support of the people. For these the only practicable route to the south was by Strath Garve to Muir of Ord.
……to Poolewe or to points on the nearby coast came the cattle of Lewis……many of these landed at Aultbea and Gruinard went up the valley of the Gruinard River ….and so by hill tracks to join either the road from Ullapool to Dingwall or that from Achnasheen to Garve…. From Braemore the beasts were driven east to Garve and Dingwall but two deviations from the main road were used by the drovers……one of these turned due south from the main road near Altguish and crossed the forest of Corriemoillie to Garve so shortening the distance and keeping the beasts on the soft ground where grazing was available. The other short cut left the Ullapool Garve road near Inchbae Lodge and crossing the saddle between Ben Wyvis and Little Wyvis re-joined the road to Dingwall at Achterneed.