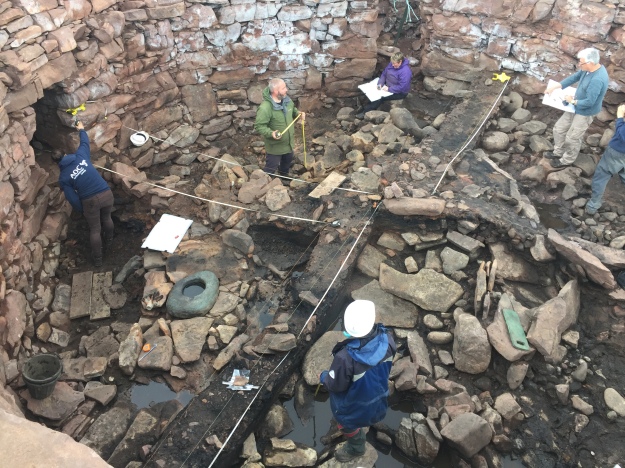 Three months ago, I was asked to write a piece on the Clachtoll excavation (see the post here), and when I was asked to do a follow up, I thought it would be best to have a look back and see where to start from. That was a revelation. When I penned the last piece,  we were a month in, enjoying every minute and let’s be brutally honest – not finding too many artefacts.

As time went on, we dug deeper, the finds became more frequent – much more frequent and in amongst it all, a mini dig on top of the Split Rock and the creation of a corbelled cell (soon, we hope,  to be otter holt) made for a fantastic summer.

So much to share, so few words – so let’s not waste any more. 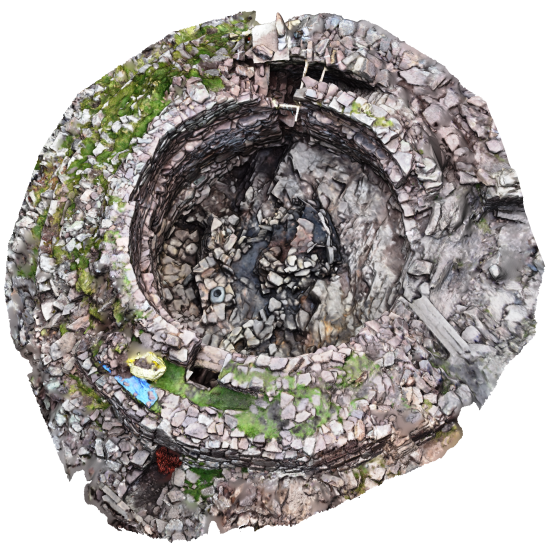 View of 3d model of the broch towards the end of excavation, Sep 2017.

I suggested that the occupants may have had sheep or goats in my last blog report – we can confirm those sheep, from some of the bones found. Curiously, if a good few years later, Ptolemy’s map of Scotland listed the people of the North West as Caereni – or “sheep people”. I can only wonder if it was those same Caereni who built the Broch?

There were also cattle, pig, deer, whale, seal and possibly boar bones recovered on the site. I am pleased however, to report that to the best of my knowledge, no human bones came from the site, so we can hope our Caereni survived the collapse.

Clachtoll has turned out to be something amazing. Although several hundred brochs were built around Scotland, most it seems, fell gradually out of use before being abandoned. Finding another that collapsed dramatically in the iron age is a bit like searching for hens’ teeth. What we uncovered this summer was a two thousand year old time capsule. One has to wonder if one of the thousand plus visitors to the site was H.G. Wells time traveller looking for an update? 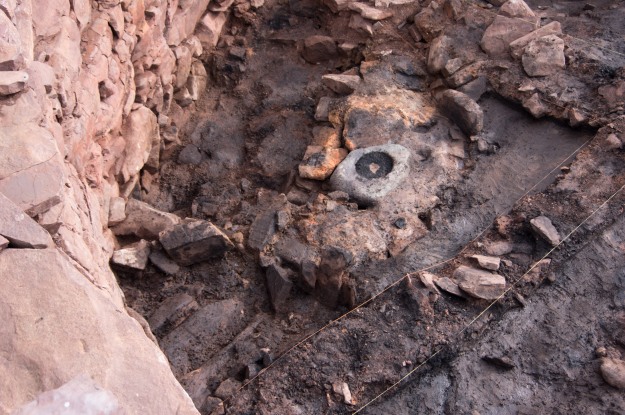 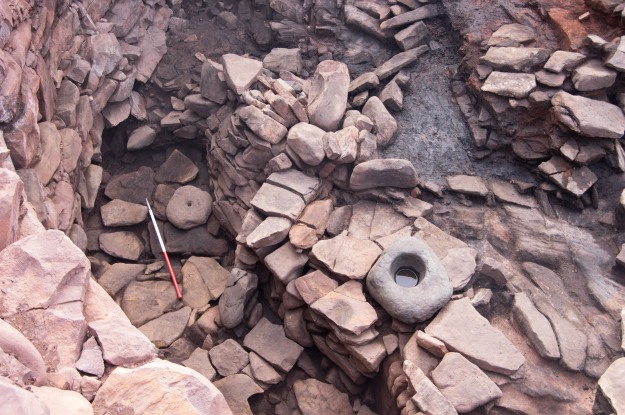 Above: the knocking stone in situ at different stages of excavation.

Perhaps the headline find was a rather amazing knocking stone, which is something I have only previously seen in some African tribal art. Essentially a large stone with a hole in the middle where a stick could be used for pounding the husks off the outside of barley before it is ground. Interesting enough in itself, but with a hole almost a foot deep and filled to the brim with burned grain, it was an amazing headliner made even more unique in that it appeared to be set into a stone and clay counter to enable working at a comfortable waist level. Wear on the right side may even give a clue as to the user being right-handed.

One find doesn’t make an excavation though, so we must also mention three sickles, a saw, an axe, seven querns, a lovely copper pin, some bone pins, combs, spindle whorls, spoons, lamps and that list goes on and on. Some beautiful pieces, I’d like to think some rare ones, but that will be for the experts to confirm. 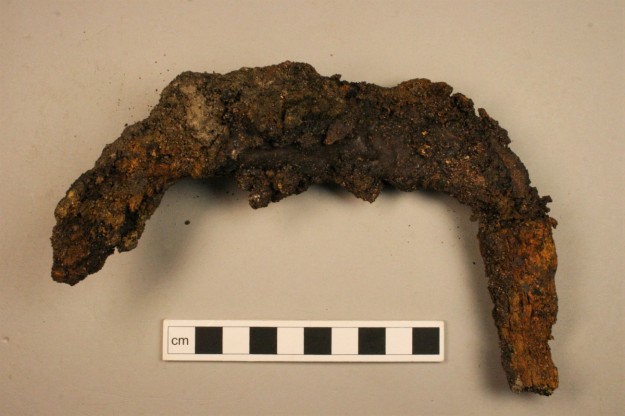 Sickle from Clachtoll. As used by Getafix? 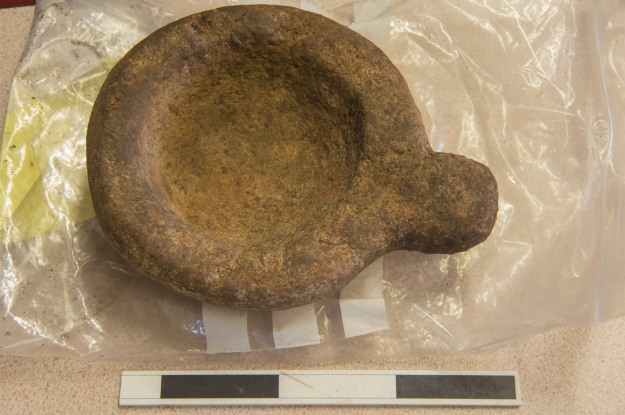 My personal favourites are the pumice stones. Nothing much in themselves, but given the notable lack of volcanos in the North West Highlands, they either floated across the Atlantic on the Gulf stream or were traded from a long way South. Having never heard of pumice found on the beaches here, I’d put trade as a firm favourite.

Our pottery finds were all of a type commonly seen on Lewis, though much closer, it is again a sign of either shared ideas or a trade network.

Another little gem was the copper and bronze pin we uncovered. In itself absolutely beautiful, but when you find a pot with curious markings that  exactly match the head of the pin, that’s when you have a story to tell! 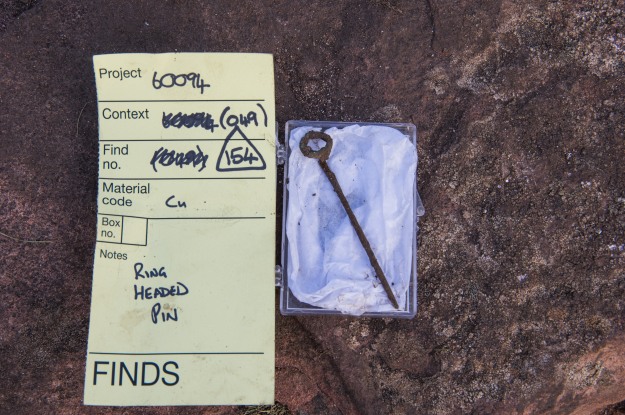 We are not all, of course, focussed on the artefacts (let’s be honest though, many of us are). What about the Broch itself? There’s a curious story. We knew it was built on the edge of a promontory. What we have since found is amazing. There is close to a 3 metre drop from the West to the East side. Whomever built it has managed to build a 15 metre high tower in a near perfect circle on a frankly ridiculous slope.

All the more amazing when you are on the site and notice that a few metres North (where we had the sieves) is a nice flat area that would have been far better suited to build on. Someone was making a more than a statement.

The slope also left us with a challenge on the Eastern side of the building, where there appears to be a souterrain and a cell whose entrance is approximately a metre or so higher. We are guessing there was a floor which levelled off the slope and put a roof over this possible storage area. 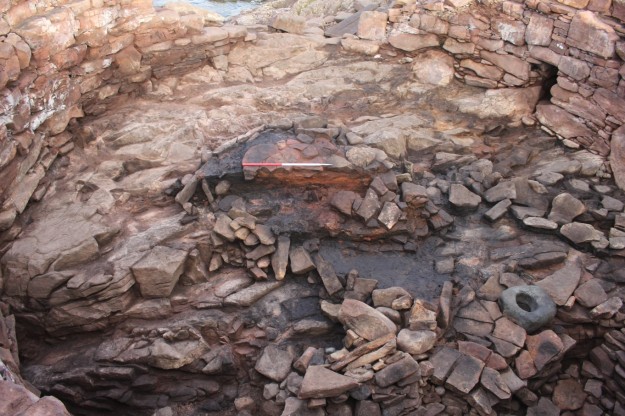 We’ve learned the building had 3 hearths, one on top of each other. The supposition here is that as time passed in it’s use, new flooring would have been laid on top of old. As the floor piled up, eventually, the hearth would begin to be swallowed, so it too would be enhanced. What this tells us is that Clachtoll was lived in for a considerable time.

People worked there, they ground barley and oats, they wove, they span and they did metal work – we have the bloom to prove it. They were extraordinary people building a broch at Clachtoll and with every report back from the archaeologists, we’re learning a little more about those iron age architects.

As for those rocks we were shifting in the last blog entry on Clachtoll? To those with weary bones, our thanks! Just under 300 tonnes of rock were hand shifted – Spare a thought for  those weary Caereni who had to lift them up in the first place. 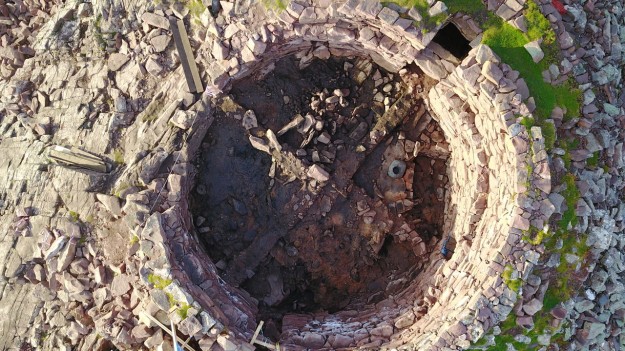 And some more examples of finds from the dig… 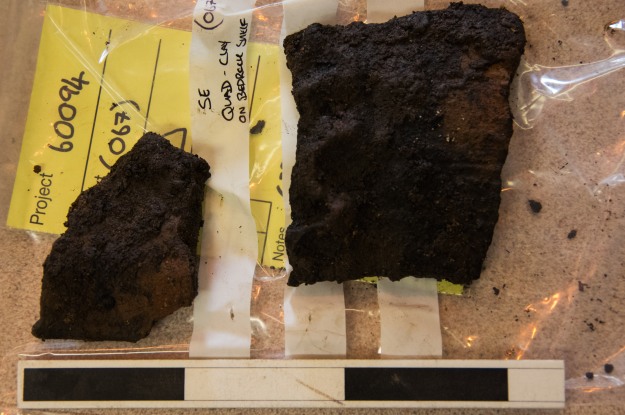 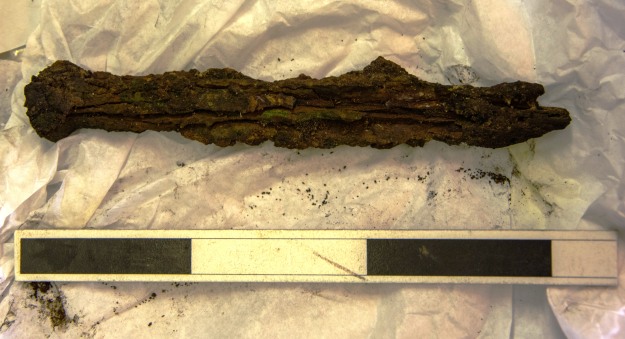 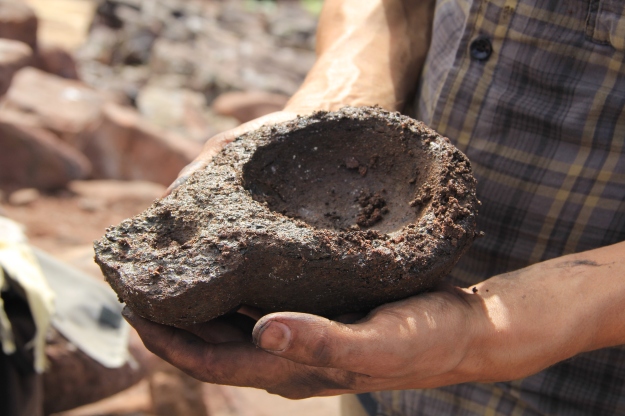 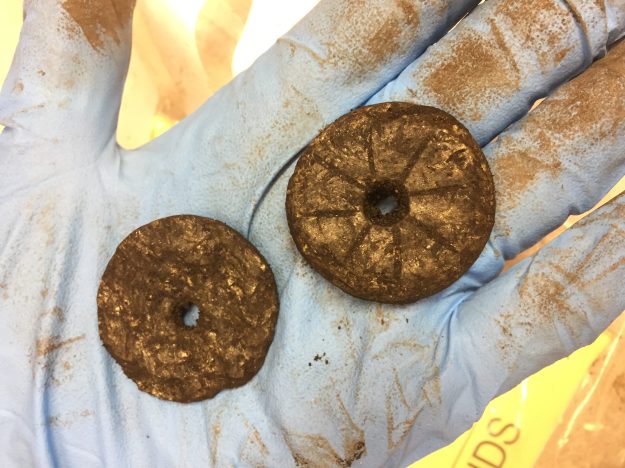 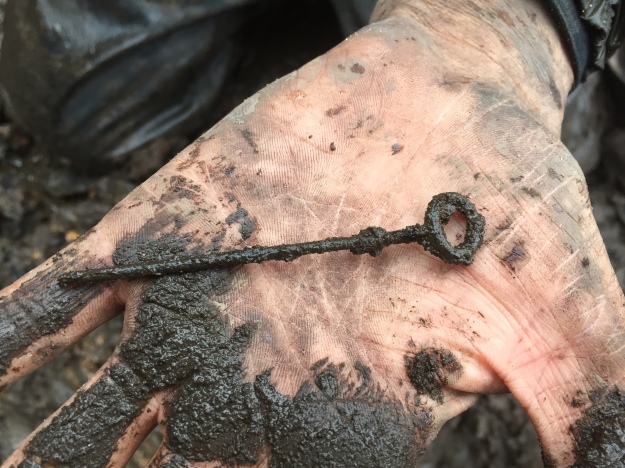 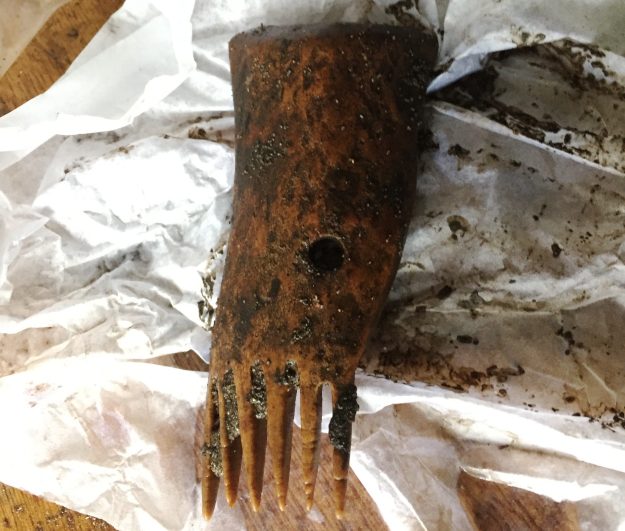 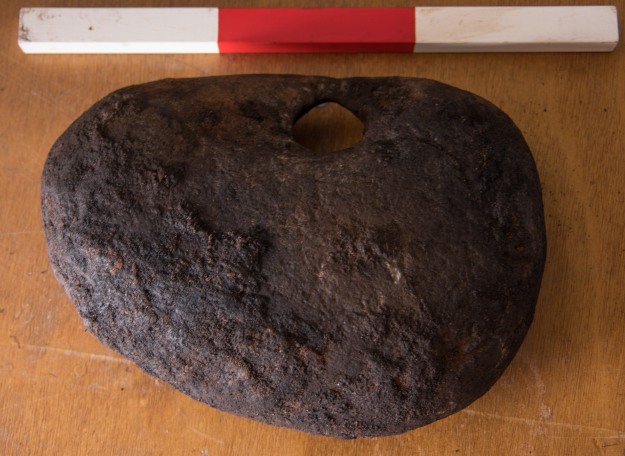