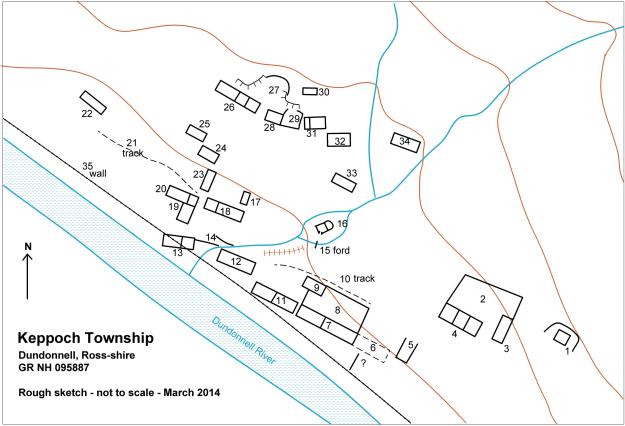 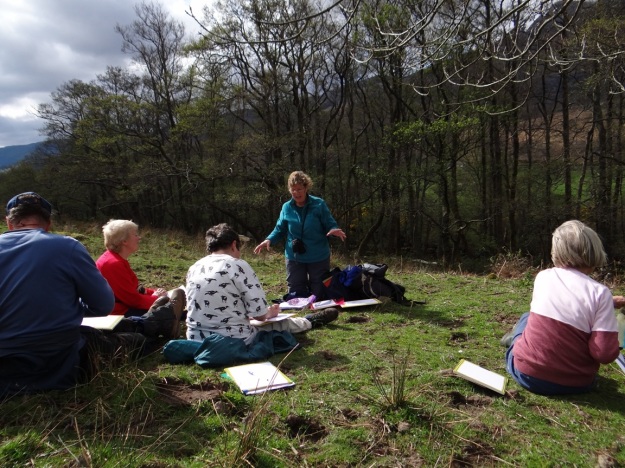 Sunday morning started off with a talk by Meryl which covered the basics of writing a site description and then went on to talk through the sketching and labelling of the buildings. I had had some previous drawing experience at a couple of digs, and in recording the fishing boats wrecks at Loch Fleet. However, I had not taken part in a NOSAS recording project like this before which the majority of other attendees had.  Also I have to confess it is not my favourite job, I generally feel much more comfortable with a trowel or a shovel than with a pencil. Any trepidation though was quickly dispelled though once the work got underway.

We had all been paired off and given a group of buildings to record. Michael Sharpe and I had been given building numbers 17, 18, 19, 20 and 24. We decided it would easiest to establish a baseline in order to quickly plot the corners of buildings using the tape and offset method. This made sense since our structures was close enough together to allow them all to be drawn on same piece of paper at a scale of 1:200. Once these basic points had been plotted the more involved task of drawing in the detail of each building could begin. Michael and I took in turns to draw and annotate while the other took measurements. 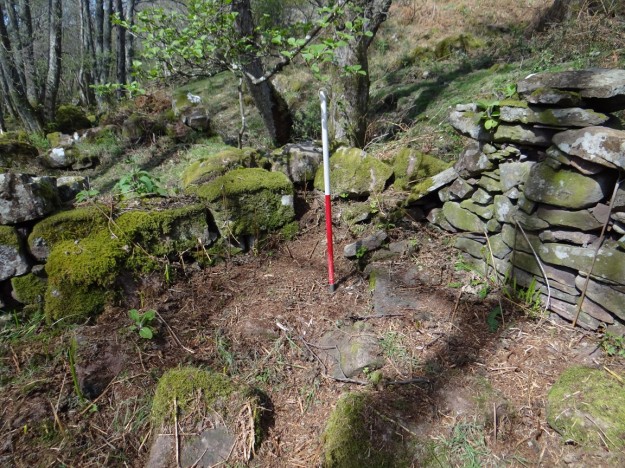 One of our buildings (no. 18) – the remains of a later twinning pen can be seen in this corner (JM).

Initially it took me a little while to get the hang of providing the appropriate level of annotation for each drawing, I found I had a tendency to write more detail than was really necessary. Also there was a certain amount of rubbing out; engendered by my tendency to write annotations where the drawings of adjacent buildings would need to go! Another challenge was deciding how the building walls should be drawn. With two of the buildings there were substantial courses of stone remaining which obviously suggested representation by a continuous line.  However, in the three other buildings the walls were frequently sketchy and in places represented only by sequences of rough boulders. In these cases we chose to draw in the individual stones, and used dashed lines to show where wall lines appeared to continue below the exposed surface. All in all we found that most issues could be resolved by employing a degree of common sense.

Annotated drawings completed and tidied up, we next completed a written description for each building. For this a pro-forma was used which Meryl had helpfully provided. Although this might not have been suitable for all applications in the field, filling it in was nevertheless a helpful exercise in that it forced one to consider the kind of information that was needed. Fortunately most of the pertinent facts were already in the drawing annotations. Photographs, another essential element of the recording process, also had to be taken for each structure and these noted with the descriptions. 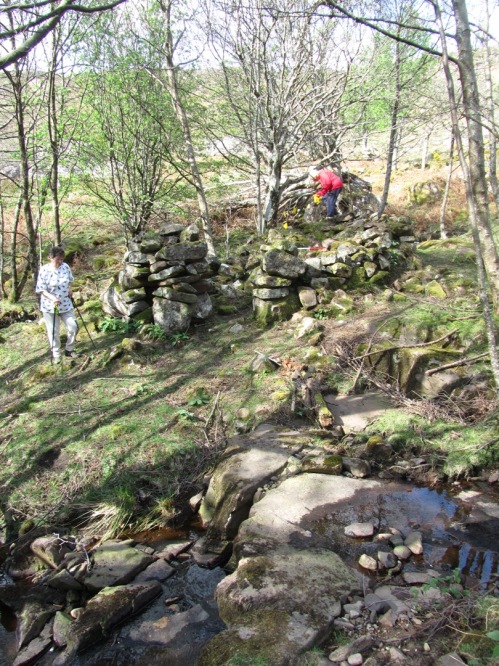 By mid afternoon everyone seemed to have finished their allotted tasks and there was the opportunity to compare notes with other teams and further explore points of interest in the village. One building (no. 16 on plan), situated on an island between two branches of the burn, was clearly revealed to be a kiln or furnace of some sort. Superficial cleaning revealed a flue leading in to a raised kiln or furnace bowl at the North East end of the building. Interestingly slag was spotted in the burn immediately upstream by a sharp eyed Hazel Keiro. This obviously suggested an alternative or additional source of iron working to the north of the site. John Wombell quickly identified a likely looking apron of land below building no. 34, where one of several small test pits revealed further slag deposits of a different composition to those found in the burn.

The walk back to the road was filled with a buzz of conversation about the implications of the slag finds. On the way Anne MacInnes took the opportunity to point out some old cultivation rigs plus a trio of impressive round houses. This made for a very satisfying end to an absorbing day’s recording at a fantastic site. A vote of thanks is due to everyone involved in organising the weekend.

UPDATE DEC 14: Meryl Marshall has now produced a Report of the Archaeological Survey at Keppoch based on the results of the weekend. Further historical research can be read here.

1 thought on “Keppoch: Recording an Abandoned Township in Wester Ross”