In April 2019 myself, two Master’s students from Newcastle University – Callum Hardman and Holly Holmes, and Paco Martínez-Sevilla, a colleague from Durham University, based ourselves in Poolewe to begin a week-long walk-over survey of the coastline around Loch Ewe. The aims of the survey were to:

Why were we drawn to this remote part of the Scottish Highlands? Precisely because it is remote! The evidence for early prehistoric occupation is sparse across much of the Highland region. For example, there is no evidence for Mesolithic occupation along the coast between Redpoint, in Gairloch parish, and Smoo Cave, Durness parish (although this has not been fully confirmed). By contrast, the coasts around the Inner Sound of Skye and Applecross were intensively surveyed by the Scotland’s First Settlers project from 1998. The project identified over 130 new archaeological sites, including the Mesolithic rockshelter site at Sand, Applecross. We felt sure that the absence of sites to the north was due to a lack of research, primarily because of the remoteness of the region and lack of ‘visible’ archaeology, rather than an absence of people in the past. CAERoS was therefore initiated to investigate the next stretch of coastline, north of where Scotland’s First Settlers had finished and with the hope of finding further evidence for Mesolithic coastal occupation.

As this was just the start, our methodology was simple: walk, and look. I spent several years during my postgraduate degrees working on a project in the Western Isles with Durham University. During the field seasons, we identified a number of Mesolithic sites exposed by coastal erosion (two on Harris, and three around the Bhaltos peninsula in Lewis). Because early prehistoric sites are often deeply buried under peat or machair, they are invisible to traditional means of initial identification such as a field-walking, and are so ephemeral they rarely respond to geophysics. The destruction caused by erosive processes therefore provides opportunities to investigate hidden archaeology, including early buried landscapes. This then, was to be our ‘window’ to the past, and we struck out across the headlands to observe and record any archaeology within c.50m of the coastline using the ShoreUpdate App, developed by the Scotland’s Coastal Heritage at Risk project (SCHARP).

On the first day, we walked west, covering the stretch from Cove Battery to Camas Mor. We noted several sites along the way, including circular stone structures and modern fisherman’s bothies at An Sean Inbhir (Fig.1), a turf-covered wall at NG763921, which is probably associated with the abandoned township and head dyke at Camustrolvaig, and a sheepfold built against a rocky outcrop at NG805925. The building recorded at Camas A’Chall wasn’t identified, nor does it appear on the current OS map. By far the most interesting aspect of this stretch was the World War II memorial and three abandoned lifeboats (centred on the memorial at NG796926, Fig. 2). The memorial is in commemoration of those who lost their lives after the American Liberty Ship USS William H. Welch ran aground at Foura Island, on 26th February 1944. The plaque is also dedicated to local community members who were involved in the rescue efforts. The plaque does not appear in the HER and the abandoned lifeboats are at serious risk, situated in the intertidal zone. These have been logged with SCHARP who are very interested in incorporating them into a future project. If anyone happens to be in the area and visit them, it would be worthwhile continuing to take photographs of their condition. 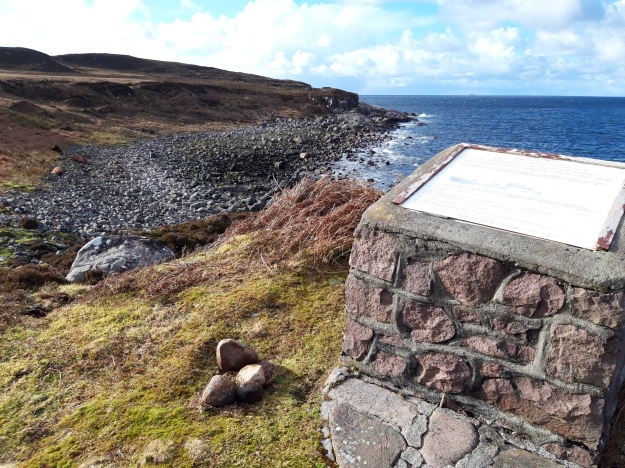 Fig.2 The memorial at Cove, and barely-surviving lifeboats (midground, left)

The second day saw us housebound due to the arrival of a storm. We managed walk up along the east band of the River Ewe to see the remains of the Red Smiddy ironworks, however they were extremely overgrown with heather and bracken, and the weather precluded any attempt see the site in detail, or where the excavation by John Hume and C J Tabraham in 1980 was located.

Day three was better weather-wise, with the rain clearing by the afternoon. We set off from Cove battery, and walked south to Naast, taking in many of the wartime installations such as the Boom Defence Base at Firemore Bay. We also explored the cave at Cove, which the landowner informed us had been used as a church until the early 20th Century. In the cave, we found two wooden planks (the remains of the pews?), spent rifle shell casings (from the war?), and shell midden deposits (unfortunately not Mesolithic). The cave has certainly had a long history of human and animal occupation, and would be a fascinating place for further study.

Thus far, there was no evidence for erosion of the coastline due to increasing sea levels. In fact, this area of Scotland is still rising following the release of land from the weight of the glaciers that once covered the region during the Late Glacial Maximum (which peaked at c. 22,000 BP) and the Younger Dryas (c. 12,900-11,700 BP), and we observed several raised beach deposits during our survey. This is excellent news for the preservation of the shoreline, but not conducive to finding new archaeological sites! Ultimately, our most promising archaeological site came not from coastal erosion, but erosion caused by sheep! In the field at Uamh Mhor, close to Cove cave, the sheep have been sheltering in ‘scrapes’ as the field drops steeply down to the shore. Previously, the meandering burn that runs through the field had also caused problems of erosion, however the landowner has now installed a pipe to control this. In one of the exposed sections we identified a number of pieces of chipped quartz, and blackened layers containing heat-affected rocks, which suggested there had been intense burning of the deposits (Fig. 3). We lightly cleaned the profile to see the blackened layers more clearly, as well as to take photographs, and in doing so observed more chipped quartz within them. Surely this was prehistoric! (Edit: In June we returned to conduct an excavation of the site, which will feature in a second blog entry). 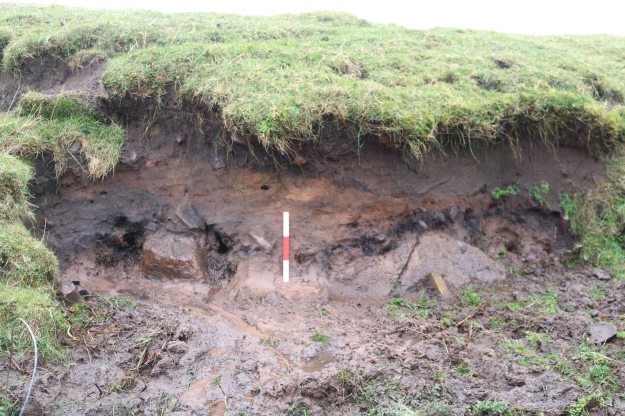 From Naast to Poolewe we saw very little evidence for erosion, with thick vegetation hampering efforts to walk this section. So, on day four we began to survey along the west of Loch Ewe, starting at Inverewe Gardens and finishing at Tournaig. This section of the survey took us around Ploc an Rubha, where an abandoned township (also known as Ob Na Ba Rubha) and a hut circle is known. The field systems associated with the township and observable in the aerial photographs weren’t visible due to vegetation, and the remains of the buildings are largely overgrown.

After lunch, and a lengthy spell of seal watching, we walked past the Dun at Loch Thurnaig which was also heavily vegetated – so much so, we almost missed it! The final archaeological site of the day was the recently excavated roundhouse and later buildings at Loch Thurnaig. Whilst the outlines of the trenches were still visible, the ground was reinstating well. We returned to the road along Allt Thuirnaig, passing what we presume to be the burnt mound recorded in 1994, although this was not fully evident.

As we were half-way through the survey, and had identified very few areas of significant erosion, we decided to take a different approach for the remaining three days. Based on the location of the site at Cove, and my previous experience in the islands, we began to target coves and bays as areas of likely prehistoric occupation. Further wartime infrastructure was observed, such as the anti-aircraft battery at Mellon Charles. We did notice a large shell midden of scallops on the beach south-east of the Perfume Studio (which serves lovely tea and cakes!), however this was associated with a modern derelict building. The bays at Slaggan and Rubha Beag (near Opinan) similarly only yielded post-medieval remains. At Mellon Udrigle, an undated shell midden was identified during a watching brief on construction works in 2009. It was suggested that this is prehistoric, however there are no observable remains. The continually shifting dunes in the area may in future reveal other evidence of prehistoric activity in addition to the previously identified roundhouse. This dynamic area is certainly a target for further monitoring.

The easternmost point of our survey reached Little Gruinard. Along the shore, we photographed a previously unrecorded remains of a rectangular building (Fig. 4), and investigated further inland where there are a number of overhangs and rockshelters along the valley. This was inspired by Palaeolithic-age animal remains recovered from the inland cave site at Creag nan Uamh, further north in Assynt.

Fig. 4 The remains of a rectangular building on the shore at Little Gruinard.

Overall, the survey was a success – we achieved our aims of identifying evidence for a prehistoric sites from areas of erosion, as well as observing and photographing known sites along the coast to monitor their state of preservation. It also provided excellent practical experience of conducting a walk-over survey for the students. In terms of the methodology, it has also given us a lot to think about. The terrain and vegetation made walking along the full length of the coastline very challenging at times, thus progress was very slow and tiring! With only one vehicle, we were also limited to how far we could walk before the need to turn back. On the other hand, the tactic of driving to different areas risked bypassing areas of the coastline that may have yielded the kinds of sites we were looking for, and would only have been identified by walking over them. There are also few places that are safe to park along the road, and some areas with no access for vehicles, which left us restricted to areas that were more easily accessible. This certainly wouldn’t have been an issue in early prehistory, when it is more likely that people moved around the region by sea rather than land. The final point of consideration is the shoreline itself. With the exception of the delicate dune systems around the beaches, the rocky shoreline and rising land is protecting this area from active erosion by the sea, which is undoubtedly a good thing! Consequently however, the reliance on areas of erosion to reveal buried landscapes meant our successful identification of the site at Cove was largely down to chance. An alternative strategy would be to excavate small test pits on top of the raised beach deposits in suitable locations, which may reveal occupation along the relic shoreline. This would require a much larger-scale operation and many more volunteers – an excuse (though none is really needed) to return to this beautiful part of the world in future, perhaps?!

Acknowledgements: The survey and excavation were kindly funded by Newcastle University, and with thanks to Callum, Holly and Paco for making it such a success.