by Mary Peteranna and Steve Birch.

Aerial view of Reeds Park during excavation 2015, looking towards the modern town and the Cromarty Firth (Garry MacKay).

The Cromarty Medieval Burgh Community Archaeology Project, which has been investigating the lost remnants of Cromarty’s historic medieval centre, has uncovered evidence of a catastrophic burning event along with a wealth of information about the development of a small Scottish burgh. The archaeological site in Reeds Park, Cromarty had been buried below a farmer’s field for over 120 years, before began investigations in 2013 after coastal erosion revealed hints of settlement. The project, which has attracted over 700 volunteers and thousands of visitors, has been dubbed by medieval specialists ‘one of the most important medieval excavations happening in Scotland.’

Although the core of the medieval burgh of Cromarty was thought to have been located at the base of the castle brae, to the southeast of the present town, the presence of any surviving remains of the settlement were completely unknown before digging began. Now, working with a range of specialists, including historians and artefact experts the archaeologists are piecing together the exciting archaeological results spanning periods of settlement between the 13th to 19th centuries. In 2015-2016, after several seasons of digging, the excavation has come down to the earliest layers and provided a detailed look at the layout of the medieval town 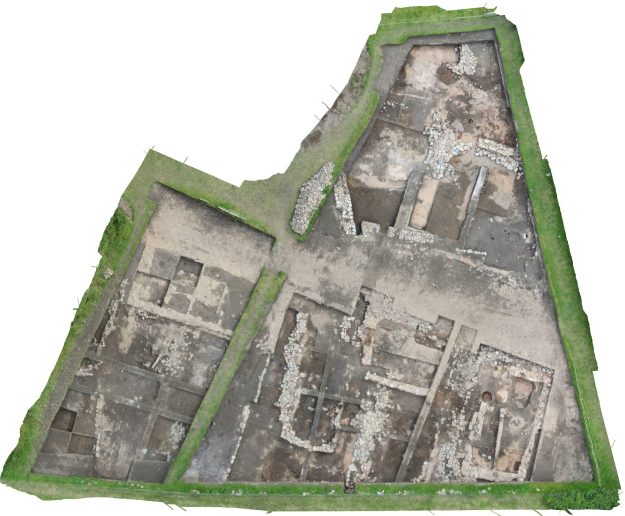 Two corrected aerial photographs of the Cromarty excavation site by Alan Thompson. Above is the view towards the end of excavations in 2015. 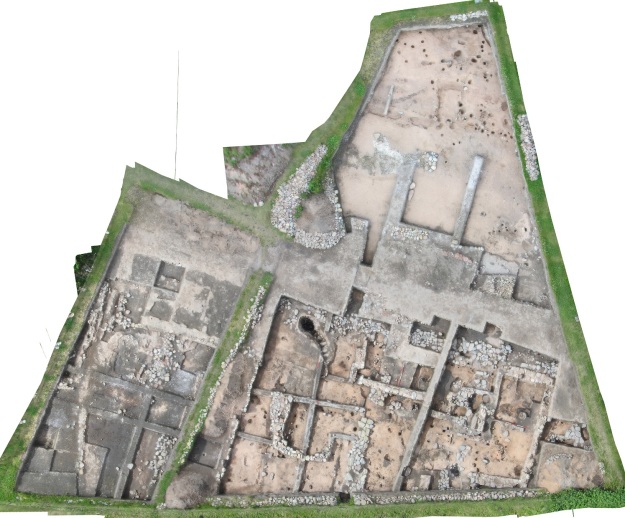 …and this image shows the substantial progress made by the end of the 2016 season.

The burgh of Cromarty was set in a strategically important location, controlling the entrance to the Cromarty Firth and the ferry crossing on the coastal route north of Inverness via Nigg, the most direct route to the medieval shrine of St Duthac’s in Tain. Cromarty was a natural location for a medieval power centre, with good coastal access and rich agricultural hinterland, strategically located on a key frontier zone in Northern Scotland. Unlike other areas of the north and Highland regions that were under clan control, Cromarty fell under the feudal authority of the Scottish crown. Although there is little documentary evidence for the town’s medieval history, it has been suggested that it was the logical location for a thanage in the 11th/12th centuries. A castle situated at Cromarty would have been a sensible location to establish royal authority on this borderland. While it was documented that the town’s sheriffdom had been established by 1266, little was known about the early history and layout of medieval Cromarty.

The archaeologists’ work from 2013-2016 has provided a detailed picture of the transitioning burgh, showing the buildings, property boundaries and zones of activity within an area focused on a former road alignment, referred to mysteriously as Thief’s Row in the 18th century. The latest buildings recorded on the site, dating to the 19th century  were located on the north side of the road; rectangular stone-built structures running parallel to Thief’s Row and set within plots of land demarcated by single coursed stone boundaries. The foundations of earlier buildings, most likely constructed during the closing stages of the 17th century mirrored the footprints of those latest buildings, displaying multiple phases of restructuring within these centuries. Artefacts associated from this period consist of low status ceramics and glass, and personal objects representing general subsistence living.

The excavations overall have provided a snapshot of the layout of the burgh in this part of the town, from the 13th to 19th centuries. Of particular interest is the manner in which building alignments change through time – the medieval buildings are initially built parallel to their road access; then turn through 90 degrees with their gable-ends addressing the street frontage; before returning to their construction parallel to the road. There also appears to be a major change in the layout of the buildings in this area during the medieval period. The earlier phases of buildings appear to align more with property boundaries running off the Causeway/High Street, while afterwards they relate to the alignment of Thief’s Row/the Common Highway, which runs at an angle to the High Street. We are wondering whether this major shift relates to erosion of the adjacent coastline and loss of land, resulting in the re-alignment of the burgh to the east of the High Street? Whatever the case may be, we have a wealth of data to review regarding building alignments and property boundaries, which should allow us to reconstruct in some detail the overall layout.

We were also able to identify a wide range of construction techniques for the various buildings through time. The earliest structures appear to have been manufactured from timber and turf, followed by wattle and daub panel construction (both of these phases used a combination of cruck-frame and upright timber post construction). After this came stone foundations with wattle and daub/clay-bonded superstructures, some of the buildings reaching two or three storeys in height. Finally, after the late 17th century, we see single storey buildings with clay-bonded stone walls. At various times, the roof structures comprised turf, thatch, pan tile and slate. 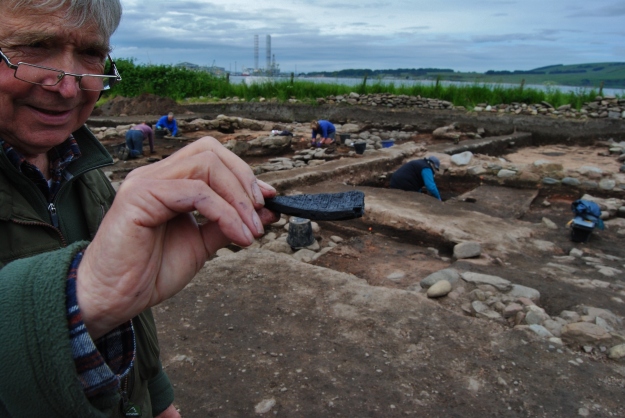 This brings us back to Cromarty’s fire. Within the sequence of 13-15th century occupation, a widespread burnt layer showed up across the site. Intense areas of burning mirrored the locations of medieval wattle and daub structures across a continuous horizon, indicating that a major conflagration event took place in the town. While it is tempting to interpret the fire as a deliberate attack, there is as yet no indication that the fire was anything other than a disastrous accident that spread rapidly between timber and thatched buildings.

From an industrial and economic aspect, we recovered evidence for small-scale metalworking/smithing, weaving, and of course fishing. In the earliest phases of settlement we uncovered two stone-lined pits, built into the sand. These may have been used for underground storage. One of the best discoveries this year was a medieval well. The surface outline of the pit was formed by a clay bank within a keyhole-shaped cut. The cut fill comprised a brown soil containing some shell fragments and only one sherd of medieval pot, with some collapsed stone at the base. This indicated a single episode of backfilling. The stonework of the well chamber, c3m deep, comprised well-built stone coursing against a clay lining to the pit. The well is accessed by well-constructed flight of sturdy steps led down to the cistern. The well had been closed off after deposition of a pony carcass in the base of it. Either deliberate poisoning of the well, or complete closure for some other reason. 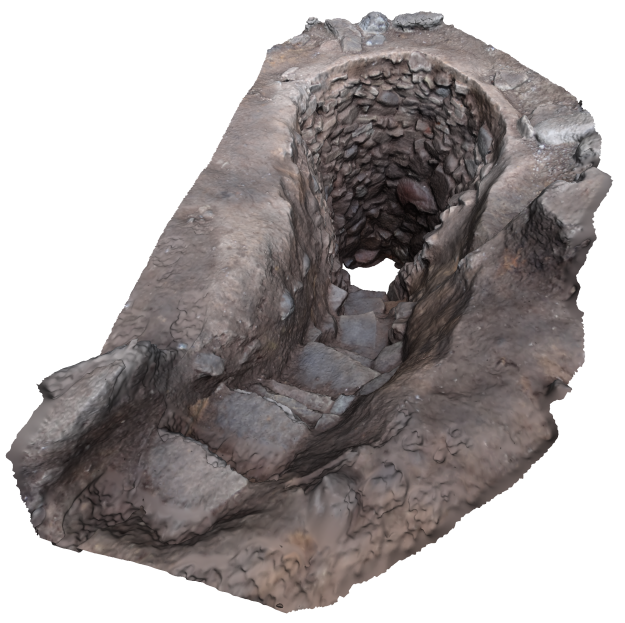 View of photogrammetry 3D model of the well. This was made up from multiple photographs taken immediately post excavation. Water had refilled the base of the well, shown here as white (James McComas).

The well was an exciting find to make in the last week of the excavations, but also of great interest is the re-use and deposition of querns/millstones. We had quite a few querns that had been used as hearths in buildings – in one house we uncovered two querns and a larger millstone representing different phases of use of the building, but all in slightly different locations in the structure. However, the most unique discovery was a stack of three upper rotary-type quern stones/small mill stones used as hearths (overlapping in their location in a building), with slab-type hearths located below and above. So, five hearths representing different phases of occupation and use. Numerous further complete and fragmentary querns were also recovered from the site in 2016. The overall total for all seasons of excavation will be impressive, perhaps exceeding any medieval site in the UK while rivalling and providing close parallels to quern deposition and re-use during the Iron Age. Indeed, many aspects of deposition at the Cromarty site are similar to those seen on prehistoric sites – including querns and animal remains (the pony in the well and a sheep/goat skull deposited in a post hole or small pit).

Medieval artefacts included spindle whorls for wool thread making, bronze and iron objects such as buckles, knife blades and sickles and a bone tuning peg from a musical instrument – most likely a harp. The tuning peg is an internationally important find comprising only the second such object to be recovered from a medieval context in Scotland (the other having come from excavations at Edinburgh Castle).

Economically, the archaeological evidence points to the medieval town being sustained by targeted sea fishing based primarily on Cod. Large numbers of iron fish hooks and boat rivets, together with the fish remains, shellfish bait middens and wood ash layer indicate that industrial scale fish processing, including smoking and drying, was taking place on the site. This is also reflected in the huge amount of locally made ceramic jugs and stone disc stoppers that may have been used within the industry. Analysis of animal bone has also shown that cattle hide and sheep wool processing formed part of the town’s medieval industry. Fish, beef, mutton and pork were all being consumed by Cromarty inhabitants.

Ceramics from England and the European Low Countries found in Cromarty reflect significant trade links in the burgh. Combined with the 13th-14th century coinage recovered by metal detecting in other parts of the town, the evidence shows that Cromarty had been a well-established settlement at this time. 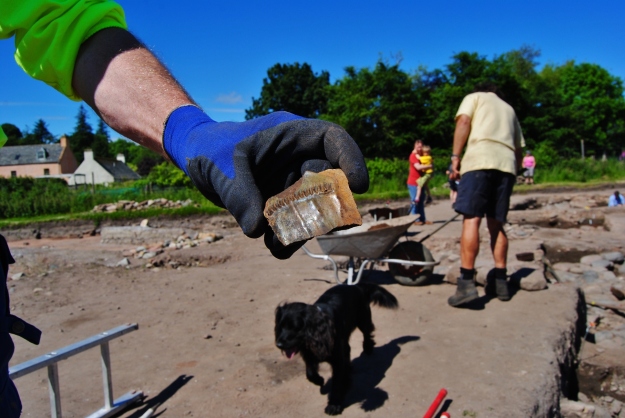 The excavations overall have provided a snapshot of the layout of the burgh and its transition between 13th to 19th centuries. The changes in building construction and alignment reflect the development of the town, its economy and trade. Cromarty appears to have started out as a significant medieval town with substantial trade links in the 13th-14th centuries, before going through alternating periods of economic prosperity and catastrophic decline.

The project team is holding a free, public seminar on 12th November 2016 at the Stables in Cromarty. For more information, visit the website at www.medievalcromarty.org. At the November 2016 specialist conference, I promised to tell our supporters about the results of the radiocarbon dates selected from the site! Well, it’s been a while coming but here are the dating results from discrete samples:

Further views of the well:

The pony skeleton in situ. 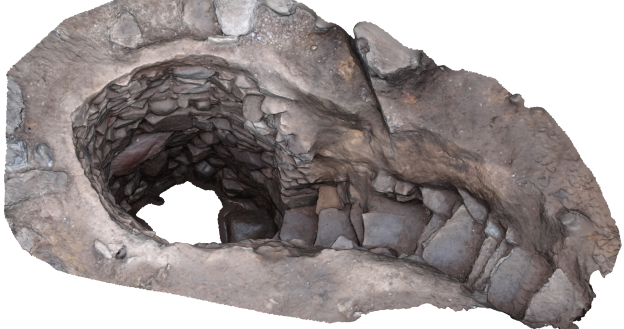 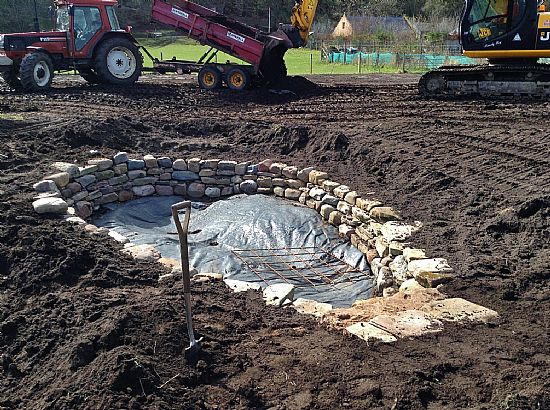 For even more on the project see our earlier posts on the 2014 season here and here.