NOSAS has just published A Year of Highland Archaeology: A Collection of the Projects and Activities of the North of Scotland Archaeological Society . This new book includes 10 articles which explore some of the diverse recent projects that we has been involved with. These range from large scale funded excavations through to group surveys and small scale research projects. They highlight Highland locations from the west to the east coast, from Speyside to Sutherland.

Projects featured include the lottery funded Tarradale Through Time Project, which in 2017 saw 6000 year old antler tools uncovered near Muir of Ord on the Black Isle.  These very rare finds included the remains of a harpoon point and two “T axes” left behind by hunter gatherers on the shores of the Beauly Firth. The T axes are two of only five examples so far known in the whole of Scotland. The trench where these were found also tantalisingly revealed the possible stone setting of a Mesolithic hut. Tarradale Through Time continues in Autumn 2019 with the excavation of potentially one of the largest barrow cemeteries in Scotland (further information at www.tarradalethroughtime.co.uk). 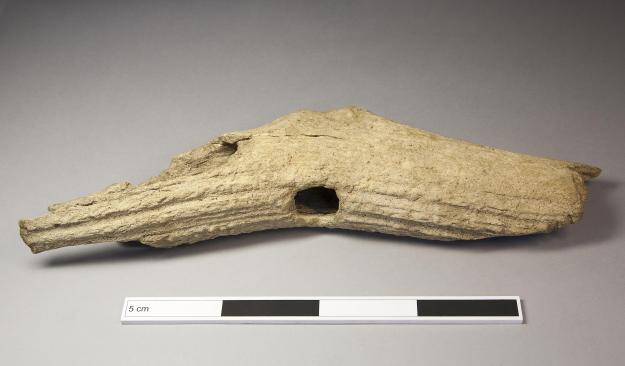 One of rare antler “T axes” found during Tarradale Through Time’s 2017 excavations.

Another chapter focuses on Torvean Hillfort, a neglected structure on the edge of Inverness. Torvean was perhaps constructed more than 2000 years ago, but it is today sadly under threat from persistent trail bike damage. A different chapter tells the much more positive story of how a collection of 400 historic maps relating to the Lovat Highland Estates, covering extensive areas west of Inverness, have now been scanned and made available online.

A different chapter still focuses on the NOSAS’s work with Scotland’s Rock Art Project. ScRAP aims to log as many as possible of the mysterious carved “cup marks” which appear on Scotland’s boulders and rock faces over a 5 year project. The precise date of these carvings, of which there are many good examples in the Highlands, is unknown but they are thought to have been mainly created in the Neolithic period around 6,000 to 4,000 years ago. Other archaeological locations explored in the book include Ormond Castle in Avoch, a prehistoric roundhouse landscape in Glen Urquhart, and Gruinard Island in Wester Ross.

Some of the projects featured have undertaken using long established methods of survey and others, more hi-tech in nature, involved the use of drone photography, GIS mapping, LIDAR data and photogrammetry 3D modelling. in the book’s final chapter “Aerial Photography and the Future of Plane-tabling”, examples are discussed of recent NOSAS projects where a combination of traditional methods and cutting edge IT applications have been used to complement each other. This synthesis of old and new has yielded some impressive results. 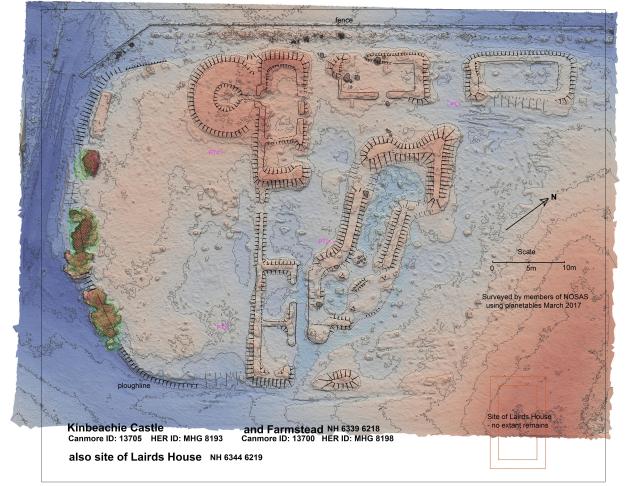 An example of the integrated use of traditional and modern survey methods: a plane table plan overlays a photogrammetry image derived from drone photography. Kinbeachie “Castle”, Black Isle.

A Year of Highland Archaeology is NOSAS’s first publication in some years (the two previous volumes – Glen Feshie (2nd ed. 2013) and Strathconon (2011) – continue to be in demand). The genesis of this project came out of the regular newsletters produced for NOSAS members. With the advent of this blog much of the function of the newsletters seemed to have been taken over, and in latter years they had grown to become increasingly lengthy and periodic affairs. This led to comparison with the “Yearbooks” which had been informally published and distributed to members in NOSAS’s very early years – examples can viewed here.

The idea began to take shape that we might dispense altogether the newsletters and publish a new yearbook – a professionally printed volume that would be provided free to paid-up NOSAS members and sold to the general public. This seemed especially apt since NOSAS had recently celebrated its 20th anniversary with a conference and other special events. A subcommittee was duly formed for this purpose and they in turn became the book’s editorial team; Jonie Guest, Meryl Marshall, James McComas and Roland Spencer-Jones.

Meryl kicks off A Year of Highland Archaeology with an overview of NOSAS’s 20 year history taking in highlights such as past projects at Strathconon, Glen Feshie and Loch Hourn. Many of NOSAS’s project reports can found here. The society was originally established by a group of amateur and professional archaeologists keen “to further the study of Highland archaeology and to promote that interest to a wider audience”, principles which it continues espouse in this latest publication.

The 10 articles featured in the book are:

NOSAS volunteers and HES archaeologists consider a lime kiln, prior to a plane-table survey in Glen Banchor.

The last word here is given to the book’s foreword:

In 2018 NOSAS celebrated 20 successful years of its existence, during which it has developed into a thriving and dynamic group willing and eager to investigate new fields of archaeology and take on new challenges. Over the years we have undertaken many projects, gaining in knowledge, experience and understanding. In the recent past we have embraced new ways to use digital technology in the study of archaeology in the North of Scotland. This publication describes some of the archaeological projects and activities undertaken over recent years. Some have been carried out using long established methods, such as field walking and planetabling. Others have used more digital techniques, such as photogrammetry and drones. All, however, are enjoyed by an enthusiastic band of local amateur archaeologists. These ten articles provide a varied, interesting, even experimental, programme of our undertakings. It seemed totally fitting that we should collect them into a publication. There was no shortage of members coming forward with contributions for it. Many thanks to you all; and many thanks to all those who have helped and encouraged NOSAS over the years. Enjoy!