Over the years NOSAS members have done a huge amount of important work finding and researching the archaeological evidence for the herring fishing industry in Loch Hourn in the 18th-19th century. This included looking at the remains of herring curing stations on the west coast, and some NOSAS members will remember going over to Tanera Mor, off Coigach in Wester Ross, to carry out a measured survey of the substantial standing ruins of the curing station, built in 1784 (read the report).

Isle Martin in the 1750s and Tanera Mor in 1785  from maps held in Castle Leod. Thanks to Steve Husband and Meryl Marshall for the copies.

Tanera Mor is one of the earliest herring curing stations in Wester Ross. The first was Isle Martin, in 1775 with Culag at Lochinver in Sutherland established a short while later, then Tanera in 1785 and eventually the fishing village of Ullapool in 1788. The greater part of the Isle Martin buildings were converted to a flour mill in 1937 then completely demolished. Culag fishing station lies under the Culag Hotel. The great red herring curing house in Ullapool was truncated by about 1/3 to broaden the entrance to the ferry car park and converted to Calmac offices in the 1970s, without any building survey or photographic record. Tanera Mor, although roofless and much reduced after Frank Fraser Darling’s demolitions in 1939, remains as the last curing station in the Lochbroom area which might give archaeological evidence for the curing industry. This flourished only briefly but was enormously significant on a local level and also for the role it played in international affairs. 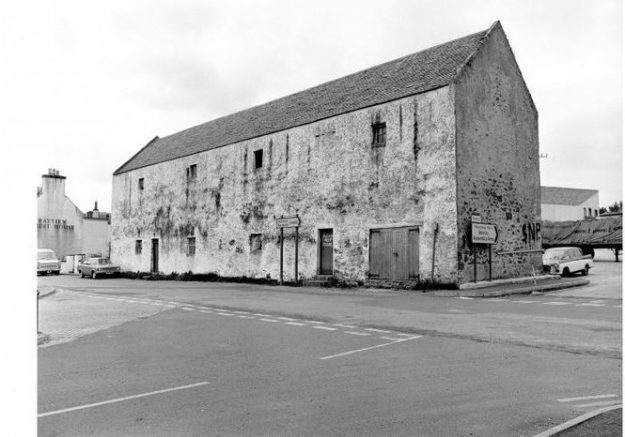 This Spring, the Isle Martin Trust received a Heritage Lottery Fund grant for a community heritage project. Volunteers have been researching the history of the island, creating a space in one of the old buildings for a micro museum, devising fictional narratives based on real events and characters, designing a heritage trail around the island and much more. You may have caught a short piece about the project on BBC Alba. Check out the website: islemartinprojects.org.

One of the most interesting challenges has been working out exactly how the buildings were used in the process of curing red herring. Why a doorway there? Was this ‘tank’ a part of the process? Are these bricks contemporary? Very fortunately, we found a set of architect’s measured sketches of the ruined buildings, made in 1937, in order to convert them into a flour mill, these have offered some clues. We’re planning some modest test pitting which may answer some of our questions, in collaboration with Ullapool High School. 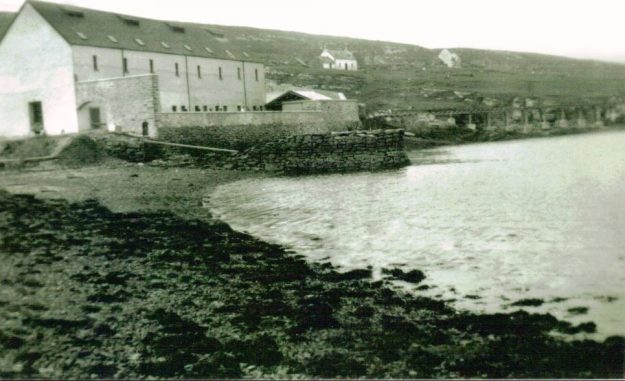 Meanwhile on Tanera Mor. You may have read that in the Spring of this year the island was sold. The new owner has big plans, none of which have yet reached the stage of application for planning consent. Fortunately, Ullapool Museum approached the owner with the offer of carrying out some historical research. I was able to take the opportunity to convince the owner of the need for a detailed audit of the island’s heritage resources, including carrying out a full archaeological survey to fill in the gaps left by previous surveys. I have not gotten very far yet, after only two trips to the island, one in pouring rain, but have managed to do a study of the island’s buildings, (excluding shielings and enclosures), which come to about 46. I hope this will inform the owner in his plans for conversion of ruins to holiday accommodation. It raises the question of how best to preserve our more recent built heritage: convert to modern use, consolidate, or leave as crumbling ruins in the landscape?

The herring station itself raises the most urgent questions. This is a Grade B Listed building, the last (relatively) unchanged curing station in Lochbroom. The south range, consisting of the store for barrels, nets, salt etc crashed to the ground one night around 1875. The north range looks fairly stable after it was reduced in height by Fraser Darling. There is a thick layer of deposit on the floor which could contain a wealth of information about the curing process. I have been stressing the importance of respecting the Listed status and of having archaeological supervision on any site clearance, but am working at present without any sort of official brief.
There was a delightful gang of Romanian workmen living on the island when I was there and when work is quiet they are found things to do, such as strimming the burial ground and clearing out ruins. A few weeks ago, they cleared out half of the south range, exposing the original stone floor. This had been cleared by Fraser Darling in 1939 to create his ‘walled garden’ so the workmen were only removing the overburden of sixty years. But Fraser Darling had made no mention of the broad, shallow brick gutters laid against the outer face of the wall, presumably an original 1785 feature. 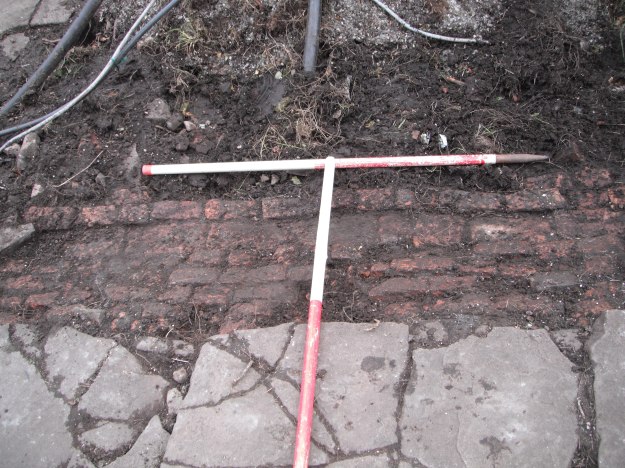 The central row of bricks forming the drainage channel were laid flat. On either side, four rows were set on their sides, rising at a shallow angle. Here the inside three brick rows have been removed when a shed was built in the 1970s. The gutter ends in a sump against the far wall, which was not cleared out. Stone slabs leading to the archway entrances in the lost wall on the right appear to have been laid directly onto the gutter. 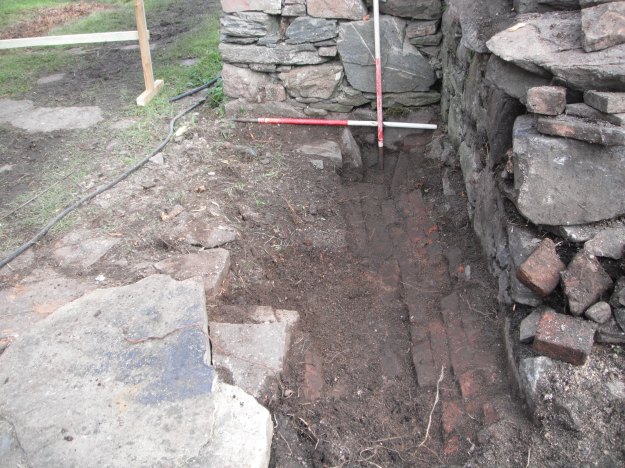 As we reached the eastern corner of the courtyard the rubbish grew deeper, and when we almost reached the wall the paving suddenly stopped. It was the edge of the kiln where peat was burnt to produce the red herrings for which Tanera was famous. The kiln was three feet wide, nearly three feet deep and nine feet long, and even now was full of ash. We mixed this with soil and lime mortar to form the body of what is now an herbaceous bed overlying the kiln and the few feet of paving west of it. 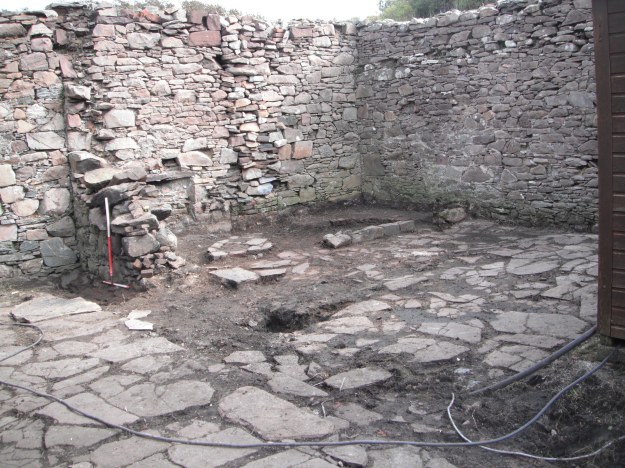 Now, Fraser Darling had a very hazy notion of how the red herring were cured. For a start the curing house, divided into compartments, was the tall north range not the lower building with large arched entrances he was clearing out. It is documented that oak was the best wood for the smoking process. Other hardwoods were acceptable, but oak was preferred and offcuts from the shipbuilding yards of the south were brought in as back cargo. Fraser darling frequently mentions in ‘Island Farm’ the degradation of the fragile landscape by all the peat cutting for the curing station, but centuries of ordinary people cutting for their home fires were probably to blame. In addition, fires were not set on a ‘kiln’ for the smoking.

So, what was Fraser Darling seeing in 1939 and what did the Romanian workmen uncover? There is a low row of stones, placed onto the slab floor, which I interpret as the edging for Fraser Darling’s flower bed. Behind this the stone paving does indeed stop, but jaggedly, as if all the slabs east of this point were lifted. The coarse orange sand that the slabs were originally bedded into survives under a layer of lime mortar rich dark soil. But, slightly higher than the level of the slabs, is a setting of bricks forming a semi-circle, with some adjoining residual stone slabs in situ. What this obviously isn’t is a ‘kiln’ measuring 3’x9’. The diameter of the brick semicircle is 3.4m, or 11’. 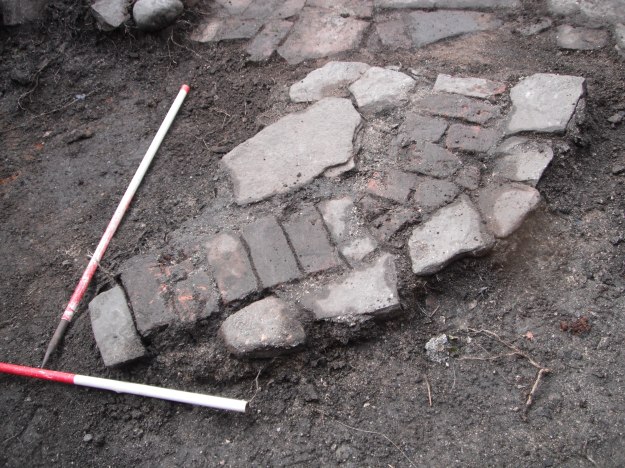 I was very good and only cleaned exposed features, though the temptation to go deeper was strong.

This just a tiny example of what archaeological treats may be waiting here. If planning consent is given for conversion to luxury holiday accommodation, we need to get in there fast and efficiently. I will be pushing for a full programme of archaeological investigation whatever the final plan is.

The proposed final plan is, of course, a sensitive conversion to holiday accommodation. The external appearance of the building may well be kept the same, and it may guarantee its preservation for many years to come, but what will have happened will have been the privatisation of an important historic building, part of our local heritage. That’s worth a public debate.