Background to the Project and NOSAS involvement

Scotland’s Rock Art Project is a five-year project to record and research prehistoric rock art. The scheme is run by Historic Environment Scotland (HES) and funded by the Arts and Humanities Research Council.

The aim of the project is to improve understanding and awareness of Scotland’s rock art through research.  In order to research the carvings, we need to first develop a comprehensive, detailed record of where they are and what they look like.

As many of you will already know, NOSAS is a partner in this project.  Our specific role in 2017 is to work with Tertia Barnett and her team to pilot and test the recording methods to be used.  Beyond that we will be one of a number of Community groups recording rock art across Scotland.

As with all such projects, there is a challenge in ensuring that small groups, working independently in the field, make their records in a sufficiently consistent and comprehensive way that the results are meaningful for analysis by Tertia and her academic partners.

Tertia has extensive experience in recording rock art in England, including in the Northumberland and Durham Rock Art Project (NADRAP).  At that time photogrammetry was still somewhat specialised and could only be used selectively, but despite that some great results were obtained demonstrating that rock art is an ideal subject for photogrammetry.  The progress of technology since then means that our project will major on the use of photogrammetry – we intend that all panels (each discrete exposure of a piece of rock art is called a panel) should be recorded this way.

Tertia also plans an App for recording, the idea being similar to that used by the Scharp/Scape project which some of you have used.  That will take a little time to specify and program, and so in the meanwhile (for the pilot work) we are using paper forms. 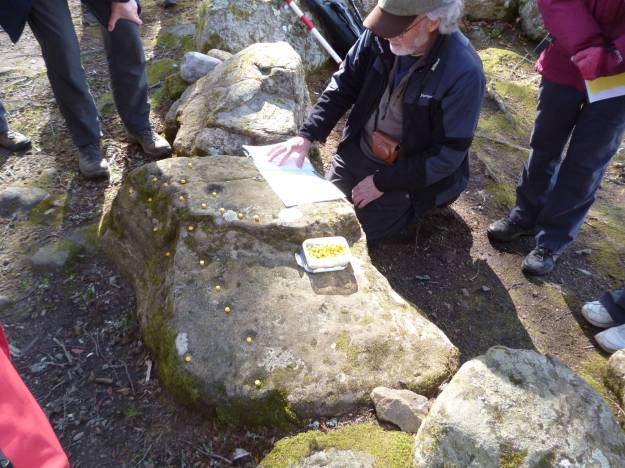 Discussing how to record this CMS. (Photo Anne Cockroft)

NOSAS Involvement in the Pilot Project

NOSAS has committed to work with Tertia to record enough panels in our local area in 2017 to fully test the methods she is developing.  35 members have indicated an interest and most of these have already become involved.  If other members are interested they should contact John Wombell or Alan Thompson.

The project is now underway.  We have held two ‘familiarisation’ afternoons at Clava, plus training sessions with Tertia at Dingwall and Drumore.

Because of the numbers we held the session twice, once on a weekday and once at the weekend.  We chose to visit Clava because of its convenient location, easy parking and access for a large group.  It is of course famous for the Clava Cairns, but in addition there are a series of panels built into the cairns and at nearby locations.  We were able to compare the records with what we could locate, and examine and discuss the panels. 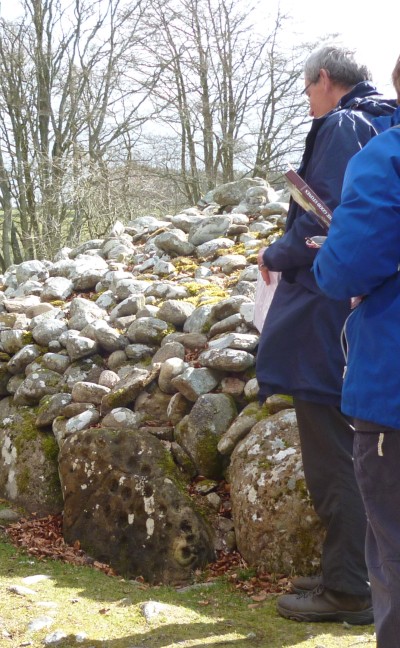 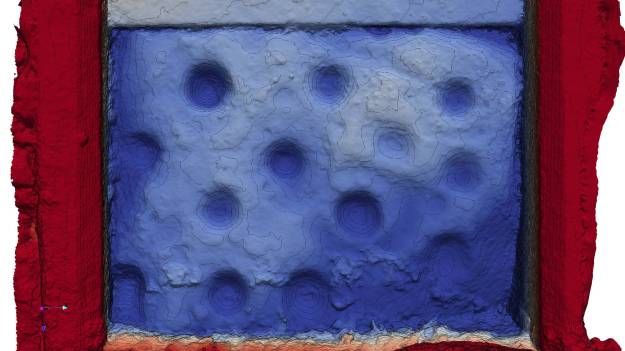 Part of a CMS now in a garden wall.  (Photogrammetry Alan Thompson)

Each group also took a set of images for photogrammetry, which was subsequently processed and put onto sketchfab.  We can see that this experiment was not entirely successful as not enough pictures from around the stone were taken.

The sessions were attended by about 20 members.  On the first afternoon Dr Stuart Jeffrey (Research Fellow, School of Simulation and Visualisation, Glasgow School of Art) demonstrated both photogrammetry and RTI (Reflectance Transformation Imaging).  He took us over to the churchyard at Dingwall church and we examined the standing stone with Pictish symbols as well as cup marks.  Stuart then demonstrated how he would take a set of pictures for photogrammetry, and many of us also took sets of pictures using other stones as examples. 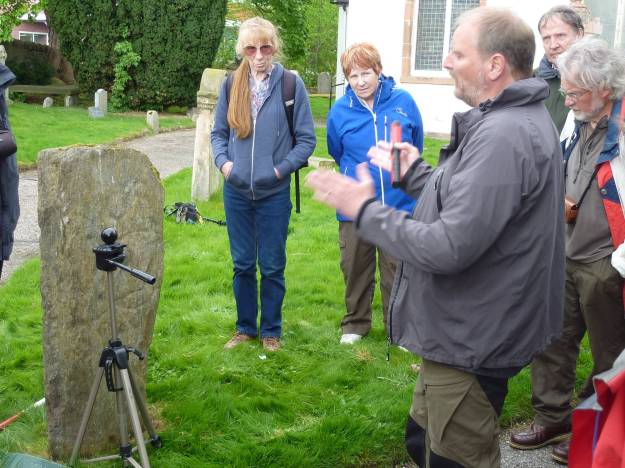 A sharp shower then drove us back inside, and we proceeded to go through the stages of photogrammetry processing using photoscan.  When the rain cleared, we went out again but conditions were not suitable for an RTI demonstration, which was disappointing.  We went back inside and Stuart set up a simple demonstration of the method, which showed the approach to data capture, and the stages in processing and presenting the results. 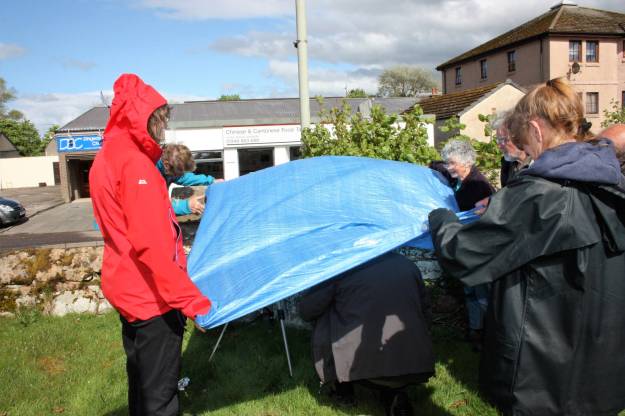 At the end of the afternoon, Tertia issued us all with draft recording forms and other documents to read (It’s worth remembering that we are the pilot group and therefore the first to test these out).

On the following day we met in Dingwall, and then went in convoy to Drumore farm as arranged by John.  In the morning we examined a large and very mossy CMS in the garden of Drumore farm and Tertia talked us through the approach to cleaning the stone, and the content and logic of the draft recording form. 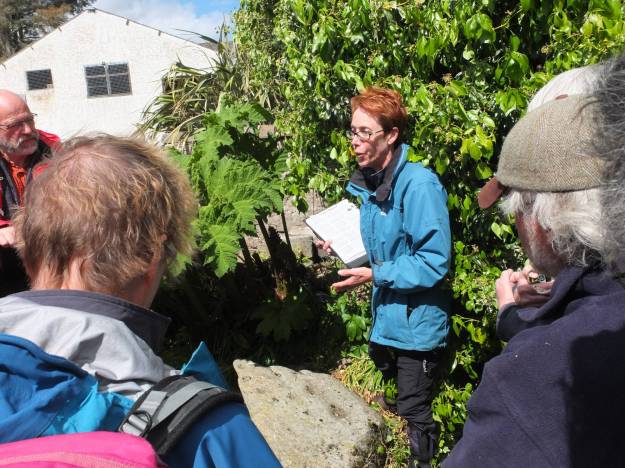 In the afternoon, we went up to an area where there are a number of CMS, split into groups of about four, and each group had a go at cleaning, completing the form, photography, and taking pictures for photogrammetry.  At the end of the afternoon we looked at each CMS in turn with the group which had been recording it. 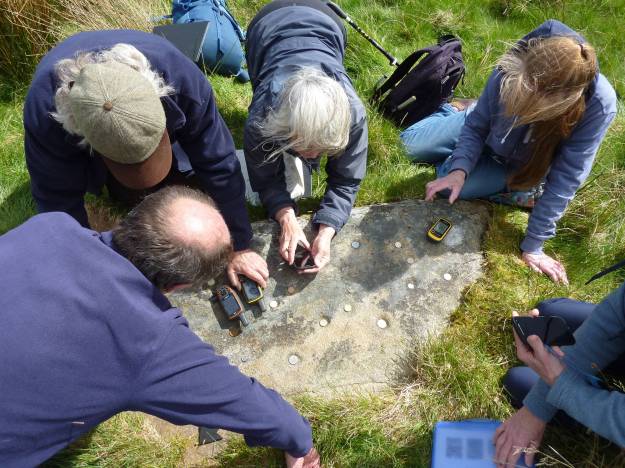 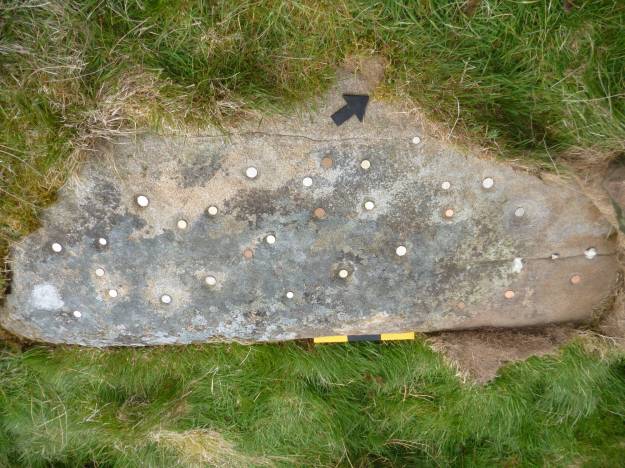 After returning home we processed the results using photoscan.

As a result we have been able to give Tertia some substantial feedback about the forms, about the approach to photogrammetry, and processed examples for her to consider.

From a practical NOSAS point of view (and it will be the same for other community groups doing recording) we need to be sure we know enough about:

– How to find the rock art in our area.

This is not as easy as it sounds!  The obvious first sources are Canmore and the local HER, but we know that not only are these records seriously incomplete, but also that many of the records especially in Canmore are of Cup Marked Stones (CMS) which cannot today be located.  John Wombell led the Ross-shire Rock Art Project (RRAP) and recorded about 150 panels in Ross-shire alone, many of which are not yet on the official record.  Even for those on the record, many have only 4 or 6 figure grid references and may now be overgrown or even relocated.  Others may be as yet undiscovered.  So we’ll have to decide how much searching we should do.  As someone said, ‘we can’t dig up the whole of Scotland’.  For the pilot stage however John has many suggestions for us.

– How to prepare the panel for recording (cleaning)

Most panels are covered at least in part in grass, moss and lichens.  Some are scheduled.  Our recording methods (photography and photogrammetry) may be non-invasive but in order to get good results we still need to clean the panels.  We are therefore testing agreed minimum impact methods and suitable tools for one-off use.

– How to make the necessary records (in the field)

We will also take photographs.

Defining exactly what pictures to take for photogrammetry remains under discussion.  Good photogrammetry is key to the success of the project.  The issue is that we won’t know for sure that we have a good set of images until we take them home and process them.  The exact ‘rules’ we follow in the field to decide the position, direction, and number of pictures to take therefore need to be simple practical and clear.

RTI (Reflectance Transformation Imaging) will be used selectively with certain panels only.  As yet we have no experience with this technique.

We have some experience of using Photoscan to process the 3D models, and our main concern is that we produce models of sufficient quality to be useful for the research, without being excessive in numbers of pictures or processing times.

The general approach will be recording in small groups of 2-4.  After visiting Drumore we have decided that we should first concentrate on that area so that we can go in a bigger group and then split up and work on nearby panels.  This will help with learning as we can share experiences and problems and is a good way of involving more of the group who were not able to attend the first sessions.

Once we have the updated forms and guidelines we will arrange dates for this and advise the group.