Lying less than 2 kilometres from the centre of Inverness, Torvean Hillfort  is a much neglected Scheduled Monument (SM3806 –see also Highland Council MHG3749) of national importance, situated on the edge of the former Torvean Quarry and currently obscured by mature woodland, scrub and rough vegetation.  It is also suffering from persistent trail bike damage that is continuing to cause erosion to the fabric of the monument.

As shown in the 2017 Atlas of Hillforts, this orange spot marks site of Torvean Fort ©Bing (Note the image taken in 2015 also shows the AOC trial trenches for the new Kilvean Golf Course.)

Located at NH 6437 4315, the fort is situated on one of a series of periglacial ridges that are considered nationally important, forming part of the extensive Torvean Landforms SSSI 1557.  In the JNCC statement  for the site it is described as follows:

Torvean is notable for glacial geomorphology, containing an outstanding range of landforms and deposits formed by the meltwaters of the last (Late Devensian) ice-sheet, between approximately 14,000 and 13,000 years ago……… it contains what is believed to be the highest esker in Britain, with a height of over 68 m.

The area immediately to the east of the fort has been extensively quarried for sand and gravel and though this quarry closed in 1989, the morphology of the area has been severely altered. The quarry lies outside the immediate environs of the fort, but the excavations and dumps from these works have affected the situation of this monument.

Unlike Craig Phadrig to the north which has been long recorded, Torvean Fort was not shown on the earliest maps of the area, such as Bastide’s 1725 or Roy’s Military Survey of c1750, where it is shown as an undifferentiated treeless ridge to the west of Tomnahurich. 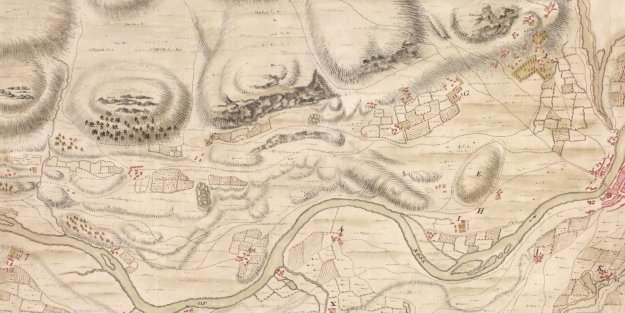 ©NLS. Detail from Bastide’s A General Survey of Inverness and country adjoining to the foot of Loch Ness 1725.

This continued ignorance of Torvean is continued in a fine series of later maps held in the National Archives Scotland concerning a long standing dispute relating to the rights to catch salmon in the River Ness.  Dating from 1765 onwards these continue to show Torvean as a single ridge and the best of these, John Home’s plan of 1774, showed the ridge as now obscured by a plantation of trees. The ridge and fort have been largely wooded ever since. The Home map is also important for showing the Cairn at Kilvain (Torvean) later destroyed during the construction of the Caledonian Canal and where an important and substantial Pictish silver chain was recovered in 1808.  It was recorded in the Old Statistical Account for Inverness and Bona Parish in 1791 that

There is a very large cairn near the river at the foot of a hill called Torvean. It some years ago was partly removed, a coffin was found composed of six thick flags.

This may be the remains of a burial of prehistoric date, but alternatively could be the resting place of a Pictish ruler perhaps resident before his/her decease at Torvean Fort. 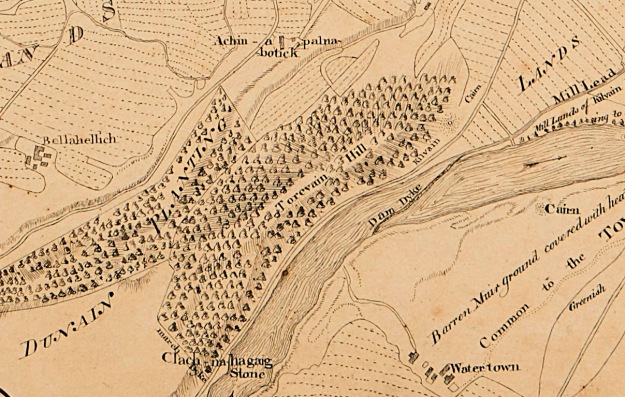 ©Inverness Museum. Detail from John Home’s 1774 Plan of the River Ness to the north of the bridge of Inverness. 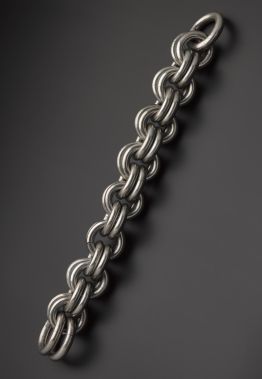 A silver chain (Highland Council MHG3800) was recovered from Torvean Cairn in 1807. At 2.88 kilograms it is the heaviest of ten similar chains thought to be made from Roman silver and dating to the Pictish period, possibly the 5th century (photographs above ©NMS).

Torvean Fort (or indeed the cairn) is not shown, for example, on the detailed 1807 plan by George Brown of the projected line of the land to be removed for the Caledonian Canal from the Hill of Torvain (Register House Plan 1107).

It was also not shown on the Ordnance Survey maps of the area, first surveyed in 1868-70 and the Torvean ridge seems to have been largely under woodland for 250 years.

The fort was first described in the Transactions of Inverness Scientific Society & Field Club (now Inverness Field Club) following an excursion led by Dr Aitken in September 1879. It is possible that by the time of their visit the trees shown in the earlier OS survey had been felled, depending on how one reads the picture below.

View of Torvean Ridge and Fort as also recorded in the ISSF Club proceedings in 1885, p258 and viewed from Craig Dunain. Note Tomnahurich Hill behind centre left.

A plan drawn for this publication is shown below and a description was drawn up following a further excursion by the society in July 1917.

This sketch is not a fully accurate depiction, as there is currently no sign of a rampart or perimeter bank on the summit and the line of the upper ditch does not correspond to the topography on the ground. Note the line of the plantation boundary line running down the centre of the fort.

It is of oval form, 100 feet long and 50 feet wide, protected by a surrounding trench at a considerable lower level in the slopes of the hill, forming an irregular oval, 340 feet long and 200 feet wide. On the north side is seen another, intermediate between the outer trench and the top, which has a gradual ascent towards the east end, where the access to the top is easiest. (ISSFC Transactions 1917 p377).

©NLS. Detail from OS Plan NH6443-NH6543 – AA surveyed in 1962, showing the fort as recorded.  Note that no planting is shown on the monument at this time, and also the mast recorded on the centre of the monument and the pylon and power line to the east.

The current conifer plantations on the north and northwest of the fort were established in 1963, according to estate records. Though described as a Motte on this plan and on the scheduling documentation, a form of site likely to date from after the 11th century AD, the fort is no longer described as such in Highland Council and Historic Environment Scotland Records for this site.  On morphological grounds it could be any date from Iron Age to medieval, though the proximity to the Kilvain cairn containing the early silver chain does at least raise the possibility that it was constructed for a Pictish chieftain, perhaps even King Bridei as was suggested by Dr Aitken in 1879. As no excavation has taken place on this site and any archaeological deposits are likely to be compromised by the series of tree crops and other developments on the summit, this may never be answered.

The topography of the fort can be best seen from the terrain models produced by Alan Thompson (and thanks to him for his work) from Scottish government lidar data scanned at I metre accuracy, which give  a better picture of the fort and the quarried out parts of Torvean Ridge. 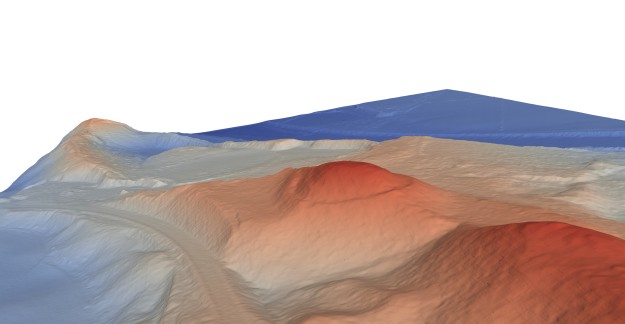 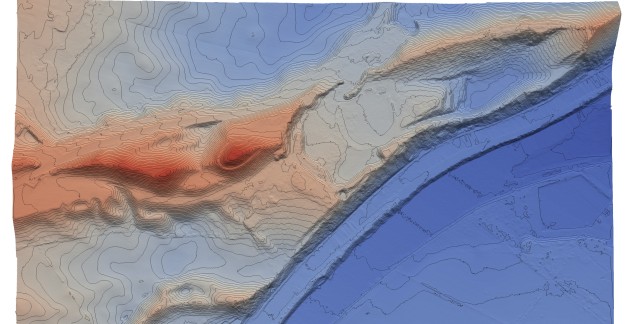 ©Alan Thompson. Contour plan and terrain model of Torvean Fort and quarry, derived from lidar data as above, in relation to the A92, the Caledonian Canal, the River Ness and the remnant Torvean glacial ridge.

Following the closure of the quarry after the removal of substantial quantities of sand and gravel from the esker ridge of Torvean, the area has lain derelict.  This is despite various schemes promoted by Inverness and Highland Council and the Common Good Fund that was recipient of the rents for the material extracted from the quarry owners.  These have included the construction of a dry ski slope facility and in 2016 a local MSP, John Finnie, proposed that it should be formally adopted as a trail bike track.  This has been informally happening for a number of years and more recently trail bikes have been using the ready access to quarry to extend routes over the footprint of the fort. This is causing problems of erosion as well as discouraging public access to the fort.

Aerial photograph of Torvean Quarry, adjacent to the Caledonian Canal and River Ness, as recorded by JS Bone in 1991, after its closure in 1989.  The fort can be seen in top right as a wooded feature above the upper line of pylons.

The summit of the fort is primarily covered in coarse grassland with substantial areas of gorse scrub and bracken and a single sycamore tree in the centre. This has been used for a campsite with a large scaffolding pole, metal pegs inserted into the tree trunk and a substantial fireplace formed of stones and ashes. On the north and west the slopes of the fort are a dense plantation of conifers, mostly hybrid larch planted in 1963, while on the south and east are predominantly mixed broadwoods, mostly sycamore, but including oak, ash, birch and beech. Much of this is probably self-seeded. This can be confirmed by estate records and earlier aerial photographs. The most prominent morphological feature on the summit is a rounded earthen bank c0.3m high by c0.4m wide and supporting a now derelict post and wire fence. There is also one large ash tree, possibly residual from an earlier planting, and several stumps of earlier trees c0.4m diameter still being visible along the line of the southern boundary ditch.  There is also a mixed tangle of oak, gean and elder visible along the eastern edge before coming to the cleared tract down the line of the pylon corridor which is now predominantly covered in bracken.

Due to tree cover and rank vegetation on the summit of the fort, it has not been possible to produce an accurate measured survey of the fort as currently surviving. The fort does not lie in council ownership, belonging instead to Dochfour Estate.  However the trail bike tracks do not respect this boundary and no fence line was restored between the council-owned land and the estate when the quarry was in operation or after it closed.

©HES. Remnant camp and fireplace on summit of fort as recorded by HES Field Investigator Anne Coombs in 2013. Previous Historic Scotland Monument Warden visits in 1992, 1994, 1998 and 2007 had recorded neither camping nor bike damage to the site.

Trail bike erosion on west side of fort adjacent to power line February 2018. 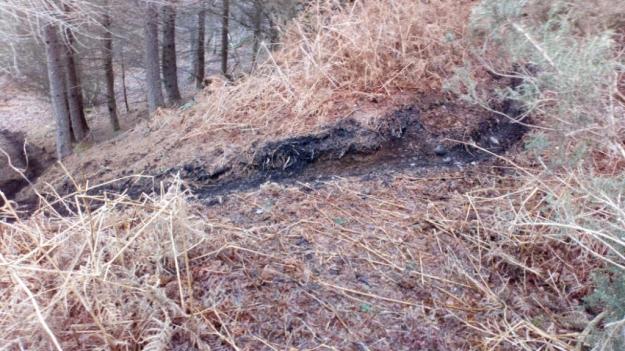 Example of trail bike erosion of fort rampart on its west side February 2018.

Efforts continue to design a project to protect this site better and make it more accessible to the public. This would also allow a more accurate plan of the site to be produced and create an asset for both locals and tourists to Inverness.  While the estate are willing to see the removal of some of the scrub and woodland they understandably do not want to see this leading to financial or future commitments towards managing the site and Highland Council are not looking to take on extra commitments .  However to prevent bikes running over the site will need to be fenced off and this will require funding to pay for this, so discussions continue with all interested parties.