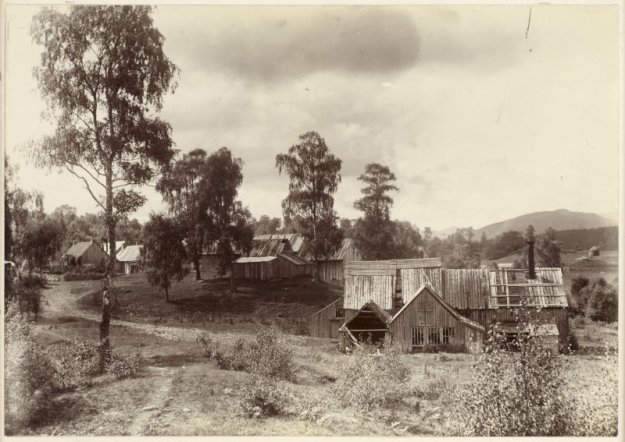 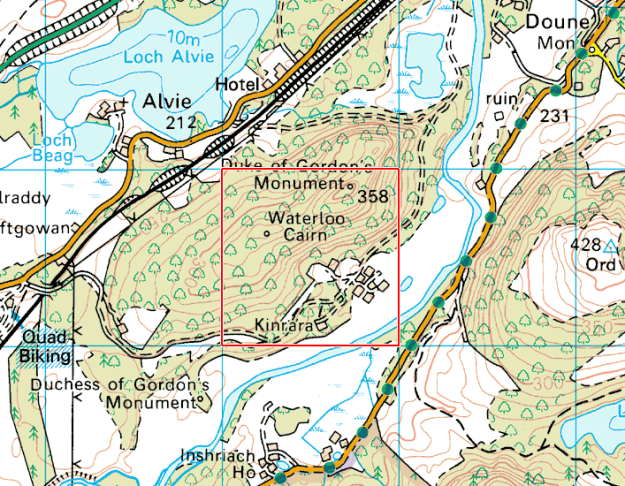 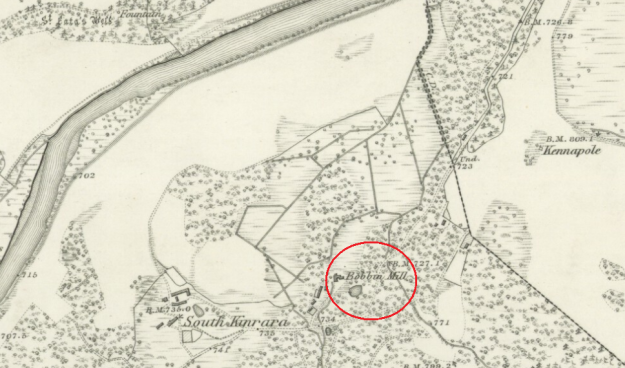 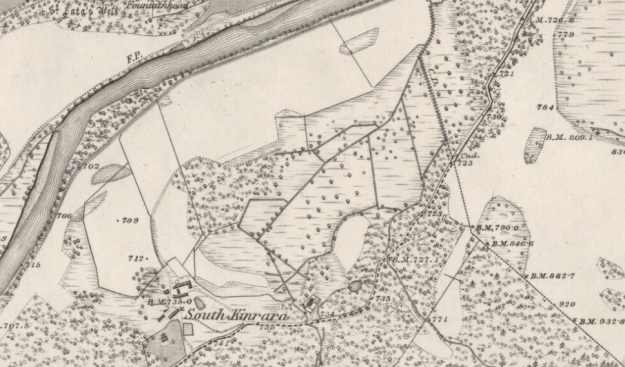 A search in the Valuation roll for 1869 – 70, the earliest available, produced the information that the Bobbin Mill and lands of South Kinrara belong to Alex AE Macintosh of Mackintosh factored by Charles Fraser-Mackintosh in Inverness. The tenants were A & William Taylor at a value of £8.0.0. It was still there in 1891-92, House, Bobbin Mill and land, South Kinrara, William Taylor listed as Bobbin manufacturer, still £8.0.0 valuation. At Dunachton there was a Carding Mill, tenant Duncan Mackintosh,valued at £5. and a Meall Mill, tenant Donald Grant, valued at £8. The House and shop at Lynwilg was valued at £18, proprietor Wm. M. Cumming. The Valuation Roll for 1892-93 has no record of the Bobbin Mill, which is odd, as the date of the photo is 1893, but taking a closer look it does look as though the wooden buildings are falling apart, particularly the roofs. 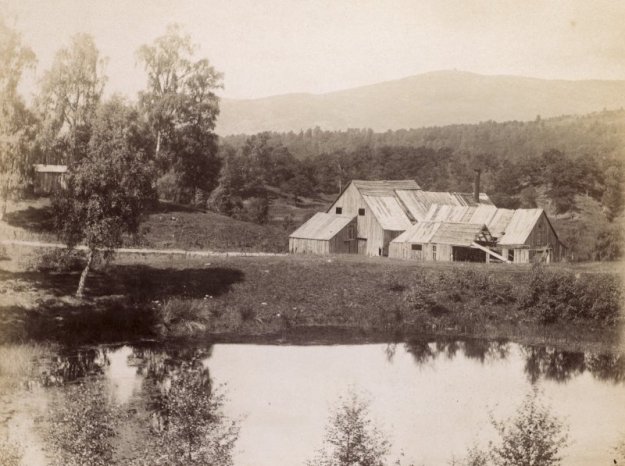 A further view of the Bobbin Mill from 1893

Bobbins, also called pirns are used in the spinning process. On a spinning wheel they are there to receive the wool or flax thread as it is spun, and are also used to ‘ply’ the wool by winding two or more strands together for strength, when several bobbins are needed. The reels of thread for my sewing machine are all ‘bobbins’, I still have a few wooden spools, but the modern ones are plastic.

The bobbins made here may have all been for local use, or exported to the towns and big spinning mills, such as Stanley Mills near Perth, in operation from 1780’s to 1989. When the processing of fibres became industrialised a commercial mill would have needed thousands of bobbins for the machines. Bobbins were often made of birch wood, which is plentiful in this area of the Highlands, and is a good clean straight grained wood to work with. Rowan was also used.

An item found in an 1890’s Kingussie Guide, (cost sixpence, 6d.) gave more evidence for the mill being at South Kinrara. Descriptions of local excursions are given, and one of the routes taken is along what is now known as ‘the back road’, the B970. Note the advice relating to ‘keeping your horses under control’ on the dangerous bend at Feshie Bridge.

KINGUSSIE and UPPER SPEYSIDE (Badenoch) as a Summer Resort
Feshie Bridge to Rothiemurchus: At Feshie Bridge there is a Post Office….. we leave Sir George Macpherson Grant’s estate and enter the Mackintosh property south of the Spey. On the Mackintosh’s side of the Feshie there is a very steep incline towards an awkward turn in the bridge, and drivers coming from the east should have horses and vehicle well under control.

Concealed in a hollow on the left side is the nice cottage of Druminlochan, near to which there is a sheet of water called Loch Gheal, which is alleged to contain trout and pike almost covered with hair, and which has neither feeding streams nor visible outflow, and is popularly supposed to have no bottom! Some distance further east is the farm house of Dalnavert. Proceeding we pass the farm of South Kinrara – noted all over Scotland for its fine herd of Highland cattle- and also Kinrara Bobbin Mills.

Having established that the Bobbin Mill was at South Kinrara, now known as Inshriach, I did try to compare the outline of the hills with the photo, but now the hills are totally hidden by large trees, there is no view to the north at all. The Inshriach Nursery was started in 1938 by Jack Drake who is listed among Nurserymen Members in the Yearbook of the Heather Society 1938. Talking to John Borrowman, the current owner was helpful, as he told me he had found the remains of buildings, and pointed out where, in the plant sales area shown in the photo below. 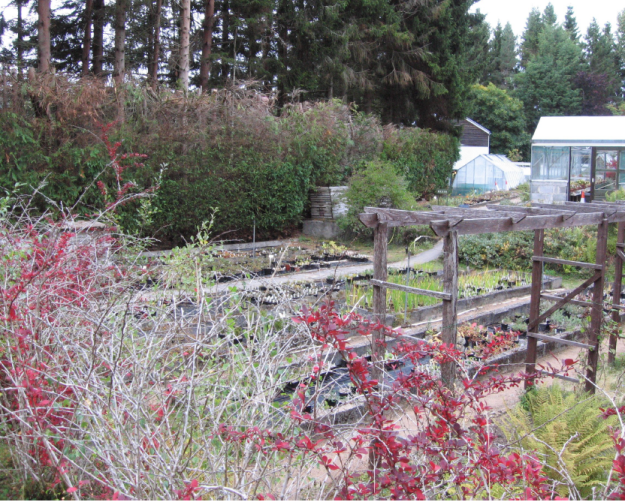 So, the site of the ‘Kinrara Bobbin Mills’ has been found at South Kinrara, the Bobbin Mill was there in 1869, and may well have been in operation long before that, and it stopped working in 1892-93. South Kinrara is now known as Inshriach, and is occupied by Inshriach Alpine Nursery – and – ‘The Potting Shed’ which is well worth a visit. The cakes are scrumptious, and if you are lucky you can watch the squirrels just outside the window on the bird feeders.