On the north side of Munlochy Bay there is a small sheltered and now neglected harbour, draped in trees and silting up. Behind it, linked by a track, is a huge hole in the cliffs. Flanking the harbour, like two long arms reaching to the sea, are the massive spoil heaps that are what remains of the quarry that dug into the cliff. For more than ten years, from 1748 onwards, sandstone blocks from the quarry were loaded onto boats in the harbour and taken across the Firth to a vast building project on a spit of land near Ardeseir. This is the stone that built Fort George.

There was an earlier Fort George, built on the site in Inverness now occupied by the Castle. It was constructed by General Wade in 1727 as part of the government’s attempt to constrain the Highlands. However, a mere two days of concerted siege ended in its surrender to Prince Charles Stuart in February 1746, and it was blown up a few days later. After Culloden it was clear that a more formidable defence against the Highlanders would be needed, capable of sustaining a garrison of 2000 men. Initial thoughts were to site near the present Inverness harbour, on the site of a previous fort built by Cromwell. However, the site at Arderseir provided more space, and no threat from bombardment from the heights of North Kessock.

Work began in 1748 under the direction of Colonel Skinner. The defences were mostly in place by 1757, and the work was finally completed by 1769, at a reputed total cost of £200,000. A colossal sum for the time.

The stone for Fort George was supplied by contract arranged through the Master Mason in North Britain to the Board of Ordnance, William Adam. There was also plenty of timber on the estates of the notable Whig families at Balnagowan, Avoch and Foulis, or floated down the Spey from Badenoch. Other materials such as nails, iron, lead, tools, pumps, coal could be supplied by the merchants of Inverness and delivered by sailing packet.

Although there was plenty of unskilled labour available locally, the master craftsman and many of the others skills had to be brought in from the Lowland towns, England, and even from the continent.

Looking North through the Harbour Entrance.

The following quote from the first Statistical Survey for Avoch gives some flavour of the traffic of stone from quarry to building site:

The late Mr Matheson of Bennetsfield, proprietor of the grounds, let the quarry to the Government, or to the undertaker employed by the Government, at the small sum of 10L a year, while that fortification was going on. A cheap contract, indeed, if we consider the immense quantity of material furnished? For 20 or 30 boats, besides several sloops, were completely employed in conveying it.

By the time of the second Statistical Survey in 1840, the quarry was closed.

On the first edition Ordnance Survey, the main components of the harbour are well shown – the narrow entrance, a large holding area and the narrow ”finger” where the boats were loaded at the end of the track leading from the quarry. 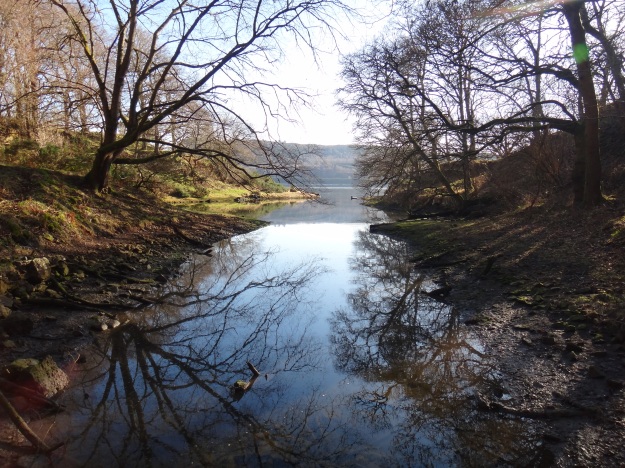 The stone block lining of the harbour walls still remains to be seen on the east side of the holding basin, but has disappeared on the west. The basin is approximately 25m square, with a 5 x 25m entrance from Munlochy Bay. The inner loading bay is similarly 5 x 25m long.

The channel down which stone from the quarry was dragged, presumably on some rail system, is clearly seen still. And the quarry behind it remains an arena of crags, vertical surfaces, remnant blocks of stone, huge elm trees and a solitary goat. An evocative, awesome place.

Detail of east wall of harbour.

Of note, just to the east of the eastern spoil heap is a small well, the Craigach Well. This small well was mentioned by the Brahan Seer, and was immensely popular during the 18th & 19th centuries. A clootie well, it was visited by the local population on a specific Sunday in May.

The quarry is now owned by the Rosehaugh Estate, who should be consulted before contemplating a visit. The harbour is best approached from the west by a small path descending from Bay Cottages. Further details can be found on the Highland Environment Record MHG50485.

2 thoughts on “The Stone that Built Fort George”