Over summer 2015 a large group has been meeting to explore World War I Invergordon in a project led by ARCH and funded by the Heritage Lottery Fund First World War Then and Now programme. A huge amount of information has been gathered, from contemporary military maps, old photographs, including an album compiled by someone who worked at the dockyard, aerial photos (one from WWI), and investigation of remains on the ground. The various strands of evidence have been brought together into a GIS database by Malcolm Standring, which currently has over 600 recorded structures. From this work a detailed picture of wartime Invergordon is emerging.

Many of the buildings used in World War I survive. Others are known from plans and old photos. Detailed naval plans survive showing which buildings were built or taken over – many labelled with their new use. Aerial photos also provide valuable information, including the 1930s photos (available on the Britain from Above website and the National Collection of Aerial Photographs website), showing those which were not pulled down after the war. A surprisingly valuable source of information has also been the Valuation Rolls, which detail buildings taken over or built by the military. 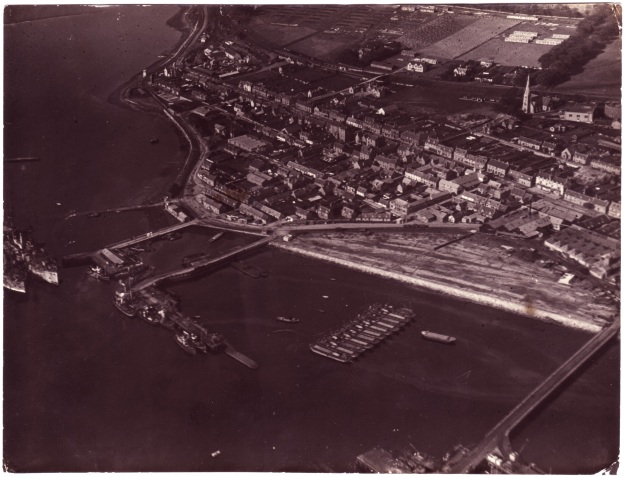 The group has found the GIS work invaluable, helping us in particular to locate and document structures such as the army camp which were only there during the war and have left no footprints on the ground. END_OF_DOCUMENT_TOKEN_TO_BE_REPLACED 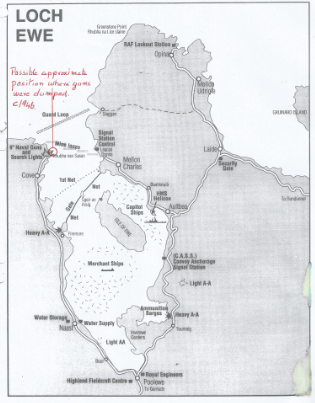 We had it on good authority – a record of an eye witness – that at the end of the last war the 6” artillery which had been positioned at Rubha nan Sasan on the west side of the entrance to Loch Ewe was dumped over the cliffs.  We had also variously heard that it had been seen previously by divers but also that it may have been salvaged.  We decided to look for ourselves.

We launched our Rigid Inflatable Boat (RIB) from the community slip at Inverasdale and headed out to the mouth of the Loch in good weather and calm sea.  The gun emplacements are easy to see on shore and were visible from the boat so there was no problem in deciding where to dive.

The first dive was made from a point just North of the northern gun emplacement, with the intention of working south past it.  Immediately on descending it was obvious that there was a serious obstacle to the search – dense kelp!  The seabed was not visible from above the kelp and could only be seen by putting your head into the seaweed, which allowed you to see about one square metre at a time.  Even vertical surfaces were kelp-covered so even if the guns stood proud of the seabed they would themselves be covered in kelp.  You could only see whether the kelp was attached to archaeology or bedrock from within touching distance. 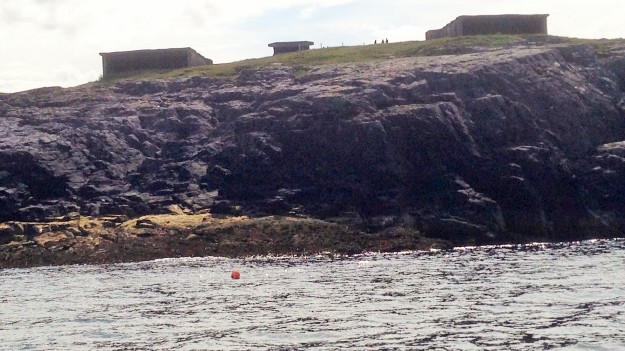 The orange floating blob marks where Richard is underwater.