The following notes were provided for a NOSAS field trip in December 2015. Photographs from the day have been included. 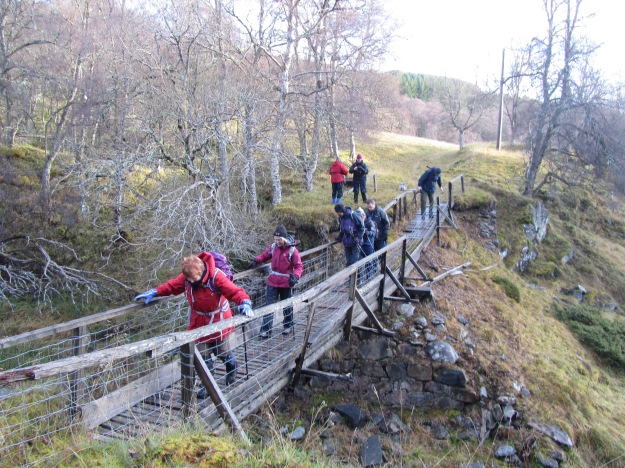 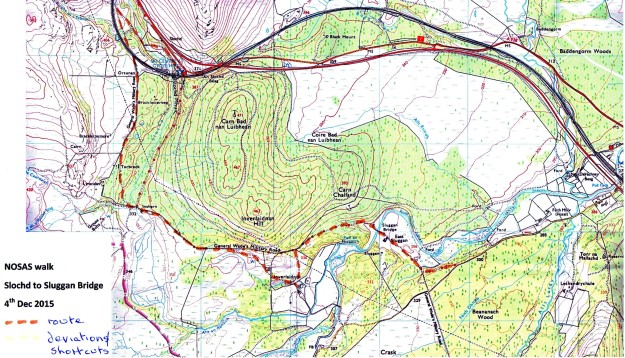 Slochd Pass accommodates several routes both old and new; 4 roads and a railway jostle for position through the narrow defile. We are all familiar with the current A9 and the old A9, a Telford or “Parliamentary road, constructed in 1834. This walk follows sections of the 2 earlier roads

The Military road of 1803 (shown below on the plan of the proposed line of the 1834 road) was built by James Donaldson in order to avoid some of the steeper sections of the original Wade military road. The road descends into the glen from our starting point at Slochd Cottages (Stagehouse on this map) and crosses the Allt Slochd Muick at “Donaldsons Bridge” GR NH 843241. This bridge survived intact until the 1960s and has now been replaced by a wooden structure; a further bridge 200m to the north crosses a side burn and is in a better state. Of this road Elizabeth Grant of Rothiemurchus in Memoirs of a Highland Lady Volume 1 (p346) writes (in 1814) “a new road has been engineered along the sides of this “pass of wild boars”, Slough Mouich, thought a wonder of skill when viewed beside the frightful narrow precipitous pathway tracked out by General Wade, up and down which one could scarcely be made to believe a carriage with people sitting in it! had ever attempted to pass. My mother had always walked those 2 or 3 miles, the new route not having been completed until some years after…….” 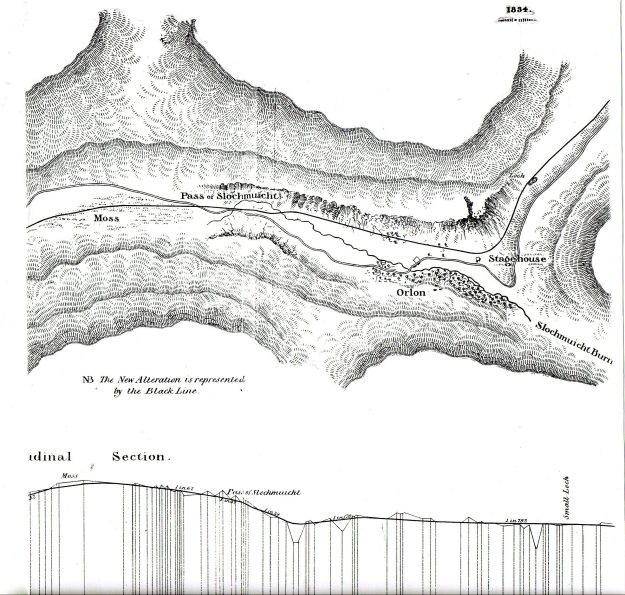 General Wade’s Military road constructed in 1728-29 is joined after 1km at one of its better preserved sections. To the north the feint remains of an earlier road can be seen taking a direct line over a hill, while to the south the line of the road has been interrupted by the later railway constructed in 1897. The Wade Bridge at Ortunan was reconstructed relatively recently and that at Insharn built of dressed stone may not be the original. From Insharn southwards the Wade road is part of the National Cycle route. The first 1.5kms has seen severe estate use and nothing remains of the original road; however after the junction with the track to Inverlaidnan it improves and a possible five-mile marker stone is seen at NH 8553 2181 Canmore ID 139468 “This stone, on the S side of the track, is possibly that mentioned (Salmond 1938) at the top of the ascent as being one of those marking a 5 mile stretch. However, that marker stone is more likely to be the one visible 118m further W”. END_OF_DOCUMENT_TOKEN_TO_BE_REPLACED